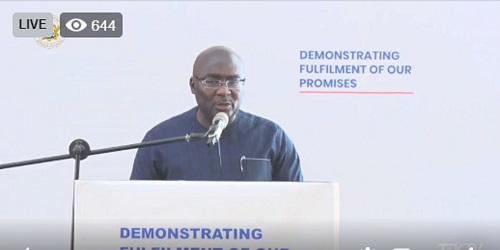 Vice President Dr Bawumia has maintained that the NPP government has arrested the rapid depreciation of the cedi.

Addressing a town hall meeting in Kumasi to outline the successes chalked by the NPP government based on the promises made during the 2016 general elections, Dr Bawumia said the floating exchange regime used by the country will never allow a fixed exchange rate.

Responding to critics that he has failed in managing the cedi as he promised, the Vice President maintained that they have arrested the cedi based on the facts he has presented.

"Between 2013 and 2016 is depreciated 18% and under Akufo-Addo for the first three years it depreciated by 8.73%, so you see from this table that the cedi exchange rate under the NPP government of 2017 and 2019 is twice as stable as it was under the NDC administration, it has depreciated by 50% less. Under the NPP we have arrested the rapid depreciation of the cedi.."Â

The cedi is currently trading atÂ 5.41905 cedis to a dollar.Â