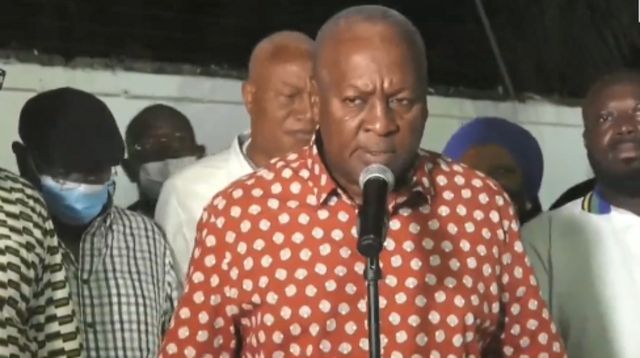 Lawyer Stephen Kingsley Bennieh a member of the Communication team of the National Democratic Congress (NDC) has advised prospective candidates who intend to contest John Mahama for the party's flagbearership position.

Mr Bennieh contributing to a panel discussion on Peace FM's the Platform programme said it will be a 'waste of time' for anyone to contest since former President John Mahama is the only one who will lead the party in 2024.

"If Mahama decides to contest again in 2024, anybody who comes will be wasting their time; he's not going to go unopposed but if you pick a form you will be worrying yourself..." he pointed out.

READ ALSO:Â No MP is stupid so be circumspect in your utterances - Muntaka tells Kyei Mensah Bonsu

Also a Political analyst and lecturer, Mr. Michael Ebo Amoah has predicted that no personality in the National Democratic Congress (NDFC) can face former President John Dramani Mahama in the partyâ€™s primaries for the 2024 elections.

According to him, until Mr. Maham declines to contest, there is nobody, who would defeat him in the primaries.

He was reacting to the demonstration held by a group calling itself Cadres for Accountable Leadership (CAL).

The group gave Mr. Mahama and the national executives of the National Democratic Congress (NDC) a 14-day ultimatum to produce collated figures or pink sheets for the 7 December 2020 elections.

Addressing a news conference in Accra on Tuesday 23 March, leader of the group, Livingstone Pay-Chalie warned they will embark on a series of protests if the party fails to honour their demands.

â€œYou see, anytime you are put in a leadership position, there is responsibility for you to discharge, so I cannot sit here and speak for the leadership of the National Democratic Congress (NDC)."

â€œWe have dispatched a letter to them asking them to produce the pink sheets or the collated results within 14 days, our congress ought to know this, if they donâ€™t do that the onus lies on them to take up the honorary thing by apologising,â€ he said.

But reacting to this, Mr. Ebo Amoah described the group as a rented one who has no locus in making such demands.

He said that no one in the party can stop Mahamaâ€™s victory in representing the NDC in 2024.

He said the sponsors of the group should rather focus on getting a candidate who is far superior to Mr. Mahama and present him in 2024.