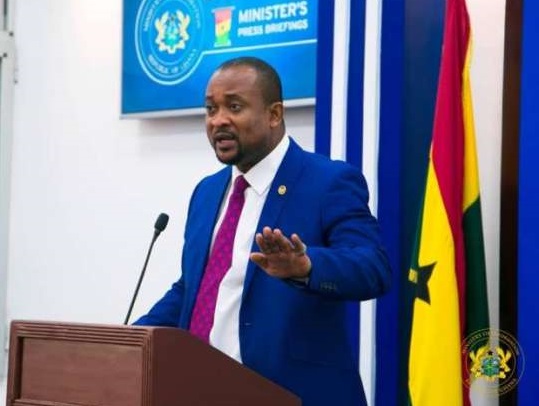 The Deputy Minister for Information, Pius Hadzide has moved swiftly to brush off the National Democratic Congress' (NDC) claims that government is working in secrecy to kick Auditor-General Daniel Yao Domelevo from office.

This Mr Hadzide has described these claims by the NDC as pure fabrications and urged Ghanaians to disregard it.

"The allegations are figments of the NDC's diabolic imagination, it is totally untrue and maliciously fabricated. There is no such plot by the government or any agency to remove the Auditor-General from office. The NDC has no proof to back their claims. No media house or group of persons should pay credence to what they are saying, they have no proof. The NDC wants to politicize this issue and we do not know the reason behind that."

The NDC in a press briefing chaired by their General Secretary, Johnson Asiedu Nketia on November 25, 2019, said the government are bent on getting him out of office after he had accused the Ministry of Finance and the Senior Minister Yaw Osafo-Marfo of contracting Kroll Associates in 2017 to recover assets from identified wrongdoers; investigate allegations of wrongdoing among others, paid the company an amount of US$1 million (equivalent of GH¢4,890,000), yet there was no evidence of work done.

"With the Auditor-General's intensified steps to reclaim the illegal payment made by the Senior Minister Yaw Osafo-Marfo, certain backdoor stuff are being done to have him removed. Instead of government chasing the thief they are rather chasing the policeman who is chasing the thief.

"Because he has resisted direct resistance with his work which is constitutionally insulated from interference they want him out," Mr Asiedu Nketia said.

The NDC says they have picked up information that in the coming days a Civil Society group will petition the President to remove the Auditor General from office.

Auditor-General, Daniel Domelevo recently in a letter has asked the Economic and Organized Crime Office (EOCO) to stop exceeding its jurisdiction by investigating alleged procurement breaches in the Ghana Audit Service.

The Auditor-General has also discovered $3.4b in unpaid penalties relating to the Petroleum Holding Fund.