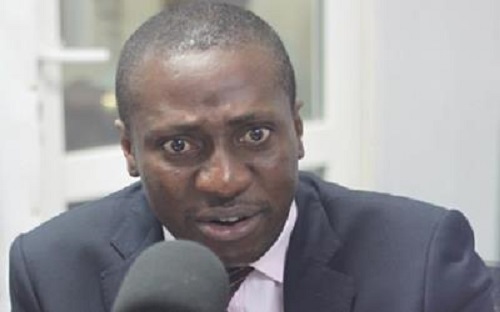 Speaking on Joy FM about the tussle between the EOCO and Daniel Domelevo about the jurisdiction of EOCO to probe procurement breaches at the Audit Service, Afenyo Markin said the perception being created that the Auditor General is being persecuted is worrying.

According to him, EOCO is not a court of law, therefore, the Auditor General should allow them to carry out their investigations because if they have any ill motive of frustrating Daniel Domelevo they will be exposed in court.

READ ALSO : There is an attempt to undermine his work, CSOs back moves to stop EOCO from probing Domelevo

"....can an investigate body by law convict a citizen or an individual, so when an institution is investigating that body is not court of law, you should be happy, therefore, for an impression to be created that the Auditor General is being persecuted is worrying, let them do what they want to do, if I was his lawyer I will advise him to go, even if they are wrong don't worry let's finish the stage one, it's not the matter of they were wrong because if they are wrong they will be exposed, if EOCO for whatever motive they want to frustrate you and they say come and they caution you, you wait after a period ..."

Auditor-General, Daniel Domelevo in a letter has asked the Economic and Organized Crime Office (EOCO) to stop exceeding its jurisdiction by investigating alleged procurement breaches in the Ghana Audit Service.

Mr. Domelevo was first invited by EOCO on November 7, 2019, and honoured the invitation seven days later where he provided a caution statement and was granted bail.

But now, referencing the Economic and Organised Crime Act, 2010 (Act 804) as amended by the Office of the Special Prosecutor Act, 2017 (Act 959), Mr. Domelevo said he was of the “firm belief that [EOCO] does not have the mandate to investigate any breaches under the Public Procurement Act.”

EOCO has also responded to the Auditor General, Daniel Domelevo's letter which stated that an ongoing investigation into alleged procurement breaches at the Audit Service, was unlawful.

Acting Executive Director of EOCO, Frank Adu-Poku, has told state-owned Daily Graphic that he was disgusted by the views expressed by Mr Domelevo.

“Yes, I just received a copy of the letter. But if he [Auditor General] has any difficulty with our mandate, he cannot sit in the comfort of his office and proffer his own interpretation to suit his whims and caprices,” Mr Adu-Poku was quoted by Daily Graphic on Tuesday.

The EOCO boss added: “That interpretation, if any, should be done by the courts,” he said,

The EOCO boss said his outfit is preparing a fitting response to the contents of Auditor General’s letter.