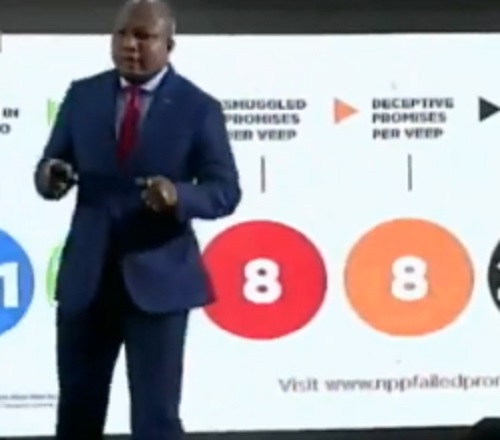 Addressing the media at the NDC's weekly press briefing today, June 15, Samuel Okudzeto Ablakwa said the NPP is finding it difficult to point out their achievements forcing them to describe the NDC's Greenbook as fantasy.

According to him, the 'poor' Pius Hadzide cannot be blamed for not being able to defend President Akufo-Addo's comments.

READ ALSO :  NDC's Green Book is an indictment on their leadership - Pius Hadzide

"What have they done with the 40 billion and that question is still relevant today, their 236 billion what have they done with it. See how they are struggling because they don't have similar JM legacy projects to show the President must declare the GreenBook a fantasy book. Poor Pius is the one being attack but it is not his fault when you are sent out there to defend a lie that your boss has put out."

On Saturday, Pius Hadzide was asked to provide evidence to President Akufo-Addo's comment he made at the launch of the Tema-Motorway interchange that the much-touted projects by the NDC only exist in their Green book.

The host of 'NewsFile" asked Pius Hadzide on several occasions to take the Green book and point out the false projects but Pius Hadzide was not able to.

Social media also trolled Mr Hadzide as they said he could not match his colleague from the NDC.

Many are of the opinion that Felix Ofosu Kwakye was too much for Pius Hadzide to handle.

Some comments on social media suggested that the NPP should not have matched Pius with Kwakye Ofosu because the latter is a smart communicator.