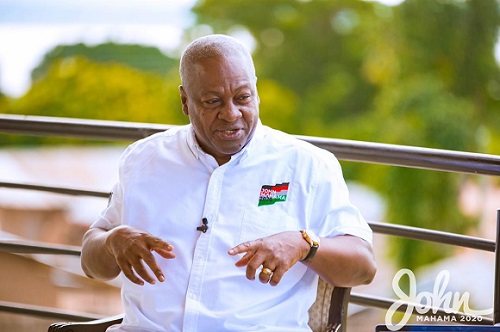 The Executive Director of the Centre for Social Impact, Richard Alima has described the presidential candidate of the National Democratic Congress (NDC), John Dramani Mahama's promise to free jailed galamsey operators as 'unfortunate and dangerous'.

Many Ghanaian small-scale miners, popularly known as galamsey operators, are in prison custody after they were arrested by the government’s special anti-galamsey security taskforce and prosecuted for offences relating to small-scale mining

Mahama interacting with the chiefs and people of Abesewa in the Ahafo Ano South East constituency on Tuesday at the start of his five-day campaign tour of the Ashanti Region, said his administration will give galamsey offenders a second chance to better their lives.

He added that with careful planning, the mining sector could create about one million jobs for the youth, adding the next NDC government will take advantage of this and implement well-planned policies to develop the mining sector.

“Because of the fight against galamsey, some of the youth have been arrested. But with our new policy on small-scale mining when we come into power, we are going to start afresh. We know they have offended the law but I believe that these galamsey operators are remorseful so we will give them another chance”, he said.

But Richard Alima believes it would have been wiser for the aspiring candidate to propose an amendment to the law that would seek the formalizing, proper structuring and growth of the small scale mining industry rather than releasing illegal miners back into the system.

“I think it is unfortunate. I thought these illegal miners were jailed under a law. I remember the law was amended to provide stiffer punishment for illegal mining. And these guys who are serving time in jail were arrested based on the amended portions on the law.

“And so if there is anything to change I would have rather preferred that Mr John Mahama will talk about changing the law or amending the law so that in future some of these things would not recur.

“But to make a blanket statement that ‘when I come to power I’m coming to free all of them’ that for me is a very dangerous statement and we need to take a second look at it.”

Mr Alima stated that Mr Mahama’s proposal only raises more questions about the way forward when it comes to the fight against galamsey in the country.

“So we need to go back to the law and we need to look at it from a broader perspective,” he said.

Mr Alima said when the law is amended to promote growth and proper structuring of the small scale mining sector, it would go a long way to prevent such controversies in future elections.

“We need to do a broader review of the small scale mining sector including the legal regime so that we can avoid some of these controversies whenever we are entering into an election year.”

Meanwhile, the NDC flagbearer has urged small-scale miners and their families to be guided accordingly and cast their ballot in his favour on December 7, 2020, to enable the next NDC government to restore justice in the small-scale mining sector and for all Ghanaians to reap its benefits, not just a few card-bearing members of the governing party.