Election 2020: Our 'powerful' manifesto forced NDC to postpone theirs - NPP 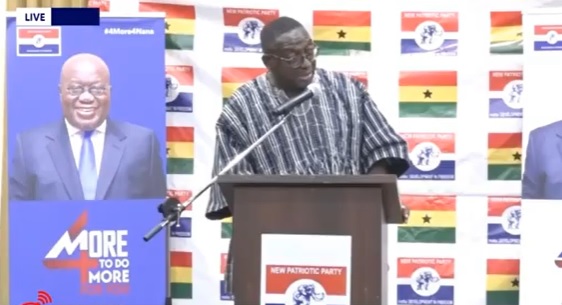 The NPP launched its manifesto on August 22, 2020, at the University of Cape Coast.

With the theme “Protecting our Progress, Transforming Ghana for All,” the manifesto outlines programmes of action in the event that President Akufo-Addo will put in place if retained for a second term on December 7, 2020.

The NDC was however scheduled to launch theirs on August 31 but moved it to September 7, 2020.

Yaw Buaben Asamoa the Communication Director for the NPP at a press briefing on Monday, August 31, 2020, said the NDC is shaken by the manifesto they outdoored and that has forced them to postpone theirs.

"When we announced the date to launch our manifesto, the world knew theirs would follow. After launching ours and they saw the messages that it carried, it hit them so hard they hurriedly postponed theirs from 29 August to September 7. We are not even sure they can launch it that day. They had to listen to ours to amend theirs. Mahama has no vision he just follows the wind. We have information that they are trying hard to change so many things and copy part of our manifesto"

Meanwhile, ahead of the date scheduled for the launching of its manifesto, some policies believed to be in the 2020 document have already found their way online.

This includes pledges by the party to employ all national service personnel who wish to be employed permanently after service.

Also, teachers will allegedly get clothes, accommodation, and transportation allowance of 10% each, which will also mean a 30% increase in salary.

Again, the NDC is promising Ghanaians that the next governmnet will ensure free education from KG to SHS, no admission fee at nursing, teaching and technical college/Universities

The party will again implement its Agenda 1million jobs for the youth and the BIG Push; $10Billion Infrastructure Program – both aimed at curbing unemployment within the country.