Ghanaians have politicized almost everything - Asantehene 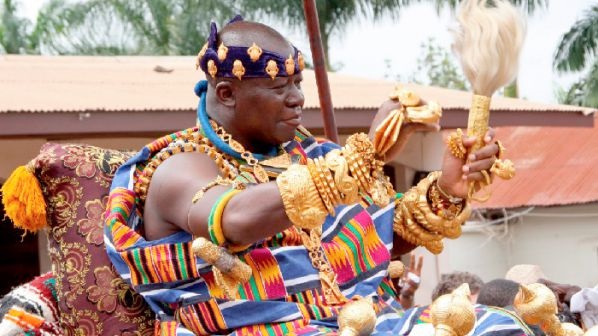 The Asantehene, Otumfuo Osei Tutu II, has expressed deep worry at the extent to which issues bothering on the nation’s development continue to be politicized.

“Politics is dividing Ghana. We have politicized almost everything. This is the truth, and we need to be candid about this,” he remarked.

“We should know that the nation’s interest is above partisan politics,” the Asantehene told Executive Members of the National Peace Council (NPC), when they paid a courtesy call on him at the Manhyia Palace, Kumasi.

The delegation, led by the Most Reverend Professor Emmanuel Asante, Chairman of the Council, was at the Palace to thank the Asantehene for his unflinching support for the cause of peace and unity in the country.

Most importantly, it was to convey the Council’s heartfelt gratitude to the king for leading the Eminent Chiefs to bring lasting solution to the Dagbon crisis, following many years of protracted chieftaincy conflict.

Otumfuo Osei Tutu said it was imperative the leadership of the nation mustered courage in upholding the sense of honesty and truthfulness in the discharge of their duties.

“There cannot be any meaningful development if we approach national and other sensitive issues in a hypocritical manner,” the king observed.

He cited how the recent efforts to end vigilantism in all its forms had been dragging due to the political and selfish interest of some political leaders in the society.

“We all know is that, the nation has her own criminal codes and laid-down rules and regulations in meting out punishment to wrongdoers, but due to politics and hypocrisy it has become difficult for us to enforce our own laws to the letter,” Otumfuo Osei Tutu said.

This, he said, must change if Ghana was to build a more prosperous society, which was attractive to investors.

Most Rev. Prof. Asante, in an earlier address, lauded the Asantehene for his commitment to promoting peace and unity in the country.