Ghanaians will easily reject Mahama because of past records - Dr Bawumia 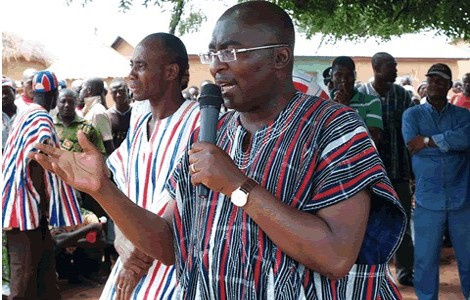 “When they say the NDC will lose the December elections, it is not us who [are] saying it. It is because of their mismanagement of the economy that the people are saying so. They could not pay teachers/nursing training allowances.

“They were increasing utility tariffs at 45% even under dumsor. They almost collapsed the National Insurance Scheme and failed to come up with a single social intervention programme to alleviate the plight of the people. SADA under our own brother John Mahama became a mess. So Ghanaians will reject him because of these failures when we go to the polls.”

Dr. Bawumia touted Akufo-Addo’s achievement as the Free Senior High School initiative, one village one dam, one district one factory, and the restoration of the teachers and nurses training allowances.

He, therefore, appealed that Ghanaians vote massively for the NPP in December so that the Akufo-Addo led administration can do more for the citizenry.

NDC flagbearer John Mahama has asked electorates to vote him back to power to enable him to correct the mistakes of his previous administration.

Mahama believes that although he bettered the lives of Ghanaians during his reign, there were steps he wrongly took in his first term in office.

John Mahama has already indicated that he is seeking power back to help mold the nation’s destiny and the future of the young generations.