Harruna Attah writes on his time as an ambassador, Says he feels uneasy returning home 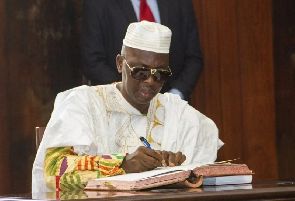 Ghana’s High Commissioner to Namibia and Botswana, Alhaji Harruna Attah has stated that though he is glad that he served the country in that capacity, he is returning home with some uneasiness.

According to him, some Ghanaians see his service to the nation as a crime.

“As I head home after two-and-a-half years of service to my country, I … cannot help the unease I feel about returning home to a country where some people look at my service as some kind of a crime…,” the former Chief Editor of the Accra Mail wrote in an article titled: Serving my country: From Namibia with love or the Returning Diplomats.

Serving my country: From Namibia with love or the Returning Diplomats

Some 30 plus High Commissioners and Ambassadors appointed by President Mahama are in various stages of transitioning home. With or without elections, diplomats know that theirs is usually a temporary outing and so are always in mental states of preparedness to return home.

You can be recalled at any time to undertake some assignments at home, or due to some unpardonable diplomatic gaffe, your own government can recall you. Host government can declare you a PNG (Persona Non Grata). A spat between your country and host country can lead to your exit as we have just seen the USA give some 35 Russian Diplomats 72 hours to leave after suspicion of Russian involvement in the US elections in which Hilary Clinton lost to Donald Trump.

Following the UN Security Council Resolution condemning Israel’s building programme in the Palestinian occupied territories, Israeli Prime Minister, summoned the Ambassadors “behind” the resolution to protest. An Ambassador in such a situation can be recalled for “consultations”. Diplomacy is a tiptoeing existence.

For example, during the long drawn out EU-ACP negotiations, different diplomats with different expertise in negotiating trade, agriculture, and other complex multilateral issues were in constant shuttling between their capitals and Brussels. The practice is to give such people diplomatic or service passports to facilitate movement and establish credentials. A Roving Ambassador would often be a kind of trouble-shooter who performs special duties assigned to him/her on the international scene. The late Joe Appiah was criticized by some for accepting that role from the late General Acheampong in the early years of the NRC.

Some people need not be government related at all in their activities to be granted diplomatic status. Their roles in society “elevate” them to the status of owning a diplomatic passport. A celebrated, or rather notorious case was when Mr. Acker Blay Miezah, a businessman requested for and received a diplomatic passport to pursue the billions of US Dollars he claimed Osagyefo Dr. Kwame Nkrumah had bequeathed him. Years after the man’s death, the billions are yet to materialise!

Business people, religious leaders, senior military people and other “pillars of society” often travel on diplomatic passports: the diplomatic passport, in other words, can be issued to just about anybody, but it is the people at the country’s Missions abroad, with specific duties, who are at the forefront of Ghana’s foreign relations. It is they who keep alive the country’s bilateral, multilateral and other relations. They are the people familiar to the popular imagination as “Diplomat”.

David Niven, in his book, “Bring on the Empty Horses”, which I am paraphrasing in my own way, tells the story of a diplomat who kept badgering a leading man in Hollywood to be invited to a wild Hollywood party. There was no shaking him off and so the Hollywood star decided to oblige the diplomat in a way only Hollywood can conjure up and organized a big party for the diplomat. When the big day arrived, the diplomat as guest of honour, was allowed the privilege of arriving late. His excitement was aroused even more when a skimpily dressed usherette met him at the entrance to usher him into the wild party. But before then, she took him to a side room where many clothes were strewn about.

Sir, she told him, this is the changing room, kindly remove your clothes and leave them here before you go into the party. Hardly able to contain his great expectations, he quickly jumped out of his clothes and followed the wriggling behinds of the usherette to enjoy the best wild Hollywood entertainment of his dreams. He could hear voices as they approached the party room. As the girl pushed the door open he barged in naked in his birthday clothes only to be confronted with the sight of disapproving glares and glances of extremely formally dressed guests in their tuxes, tails and ballroom gowns sipping from their Champaign, brandy and whisky glasses! What became of him or his diplomatic career after that, who knows, who cares…?

But that can be the lot of the so-called diplomatic community. It can get into the head because it is one calling that opens doors and allows passage into all sorts of privileged and restricted areas and events at the very highest levels of political and social activity. I recall many times how people’s attitudes would become courteous and obsequious when my identity as a diplomat is disclosed. The tone would become extremely courteous as “Your Excellency” is acknowledged. It can be intoxicating, hence if care is not taken, pomposity sets in. It is not too different from what some politicians also exhibit once they get inducted into MMDAs as Ministers, Chief Executives or simply staffers! Required accoutrements for effective service delivery like a vehicle, a house, passes to restricted areas, become symbols of power, wealth and sometimes even intimidation.

Every diplomatic tour of duty is a fingerprint; no two are identical and the tour very much depends on the individual diplomat’s nature and world outlook. A Head of Mission can complete his/her tour in a fairly lackluster manner choosing to remain on the straight and narrow or can blaze a trail of creativity, innovation and presence! The Diplomatic Corps is a sub-culture with its own norms, dos, don’ts punctuated by light and tragic moments.

A Western European Ambassador in Accra a few years ago was a saxophonist who used to jam with Ghanaian musicians at a popular jazz nightclub. Many historians agree that Ghana’s first President, Dr. Kwame Nkrumah’s overthrow was facilitated by a US Ambassador.

Understandably, diplomats from the major economic powers wield more power than their counterparts whose countries depend on their countries as “development partners”. In the just ended elections in Ghana, there was much grousing in certain quarters about a couple of Western Heads of Mission who were suspected of pushing for a regime change…

Ambassadors and High Commissioners often get caught up in sticky situations with unhappy endings like when the helicopter carrying Pakistan’s military ruler, Zia Ul Haq was blown out of the sky and one of the victims was a US Ambassador who was travelling with him. Decades later, another US Ambassador was to meet his end in Benghazi, Libya, after the ouster of Col. Gaddafi. The occupation of the US Embassy in Tehran in the 1970s has seared deep into the psyche of Americans. But it is not only American diplomats who face such tragedies; just before Christmas 2016, the Russian Ambassador to Turkey was gunned down in front of television cameras…