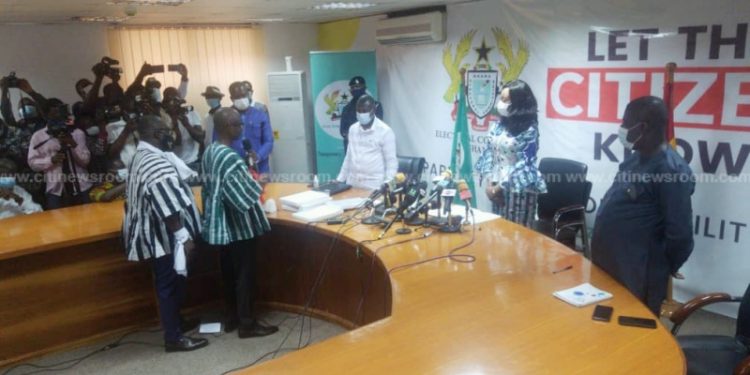 General Secretary of the NDC, Johnson Asiedu Nketia has explained why they delayed in filing the nomination of the flagbearer of the party, John Mahama.

Speaking at the headquarters of the EC today in Accra, he said some of the people who endorsed the form for the former President were called by the EC to come for new cards.

This he said has delayed them because they now had to revise the form.

"We have been given 5days to file nominations beginning from Monday to Friday, let's ask ourselves what register are we filing the nominations based on? The laws of the Commission indicated that an old register does not become extinct until a new one is finalised and certified. We have a situation when we are called upon to file nominations where there is a big doubt as to which register will be the base document for the filing of nominations."

According to him, as long as the register remains provisional it means the EC is not working with a certified register and the names of the individuals could change again.

"We were unable to come at 11 am because this morning some of our supporters who have endorsed the document provided their Voter ID numbers were calling that the commission has called to change their ID cards."

"It is unfortunate that a mature democracy like Ghana’s, we are having to go into elections as if we haven’t tasted democracy before," he added.

He concluded that they did not want to create problems for the country, hence, their decision to continue with the process.

"We are going along because we don't want to create problems for this nation but we are doing so with our conviction that if you have to eat with the devil you must have a long spoon."

President Akufo-Addo has also filed his nomination to contest in the 2020 presidential elections yesterday.

The Electoral Commission started receiving nomination forms from presidential and parliamentary aspirants from yesterday, Monday, October 5, 2020. The exercise is expected to end on October 9.