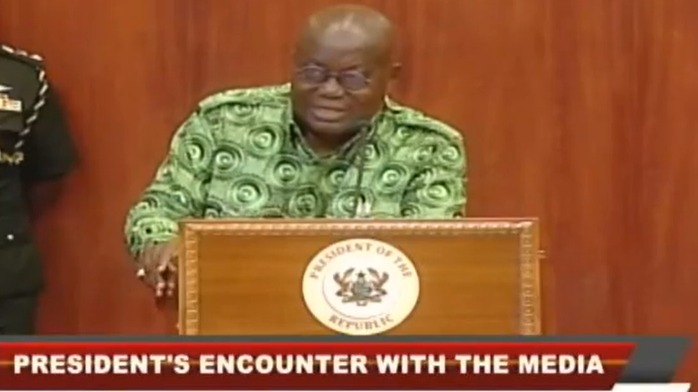 President Akufo-Addo says most of infrastructure development projects touted in the road sector by the NDC only existed in their green book.

According to him, he was accused of sleeping during his 2016 campaign when he said he travelled the whole country and did not see the much talked about roads done by the NDC.

Addressing the press today, December 13 at the Jubilee House, President Akufo-Addo said 2020 is the year of roads because anytime he travels around the country, chiefs and opinion leaders always point to him the bad roads in their areas.

He said 2020 will see great development in the road sector that will solve most issues faced by Ghanaians.

Finance Minister, Ken Ofori-Atta, made the announcement in Parliament on Wednesday, November 13, 2019, as he presented the 2020 Budget Statement and Economic Policy of the Akufo-Addo’s administration.

The announcement follows violent protests in some parts of Ghana over poor road networks.

He said : “Today the cry everywhere in Ghana is about the poor state of our roads. It is an unprecedented cry and it makes you wonder where all the roads in the NDC’s Green Book are''.

The Finance Minister indicated that government is going to focus more on fixing our roads across the country in 2020 and beyond and that to get the road sector moving and contractors back to work, government will pay 80% of all contracts.

“Mr Speaker, Ghanaians want action on our roads, not words or plans or Green Book claims about what has been done. We intend to swing into action and let our work do the talking for us,” he added.

'Year of roads' is a hoax - Minority tells gov't

The Minority Spokesperson on Finance Cassiel Ato Forson has described the Finance Minister's statement indicating government's intention of embarking on massive road projects in 2020 as a 'hoax'.
The Finance Minister presenting the 2020 budget on the floor of Parliament last week labelled the coming year as “The Year of Roads.”

Responding to the statement of the Finance Minister during the 2020 debate statement in Parliament today, November 18 2019, Ato Forson accused the government of failing to take pragmatic steps to address the poor road network in the country given what he says is the manipulation of the country’s road funds.

''Minister is telling us 3a of the budget statement that he is only going to give GHC1 billion and GHC14 million to the Ghana road fund for roads. The amount indicated by the budget for road infrastructure is more than what Sinohydro is bringing into the economy and so when the Minister tells us this year is going to be a year of roads, I ask myself where are the resources. Your budget statement does not point to the fact that you allocated revenue to those roads so Mr Speaker, I can confidently say that statement is nothing but a hoax''.