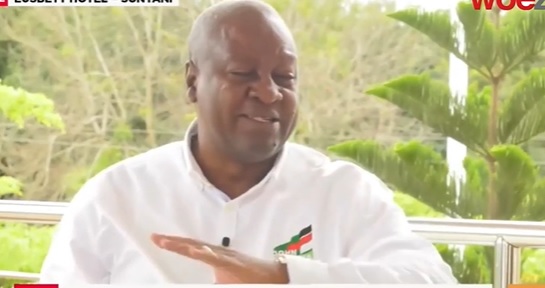 The flagbearer for the National Democratic Congress (NDC) John Mahama has disclosed the strategy the New Patriotic Party (NPP) employed to win the 2016 general elections.

Mahama was beaten to the presidency by President Akufo-Addo in the 2016 race.

The former President says the NPP used the tactics of tagging him and the NDC as incompetent and that stuck in the minds of Ghanaians.

READ ALSO: Video: Dr Bawumia hits back at Mahama over 'God save us' comment

Mahama who was speaking in an interview with TV XYZ in Sunyani on October 1 said that worked for the NPP but Ghanaians have come to realise the incompetence tag on him was undeserved and will now vote for him massively.

'For those of us who studied Social psychology you can repeat something over and over again then people come to accept as the truth and that is the strategy the NPP took in 2016. They put an underserved tag of incompetence on us and said it over and over again to get it stuck in the minds of people that we were indeed incompetent but today we can see what is happening".

Mahama recently on tour in the Bono East Region said God is not so wicked to give Ghanaians another four years of Nana Akufo-Addo.

This did not go down well with Vice President Dr Mahamudu Bawumia who also replied: "God has already saved us from you,".