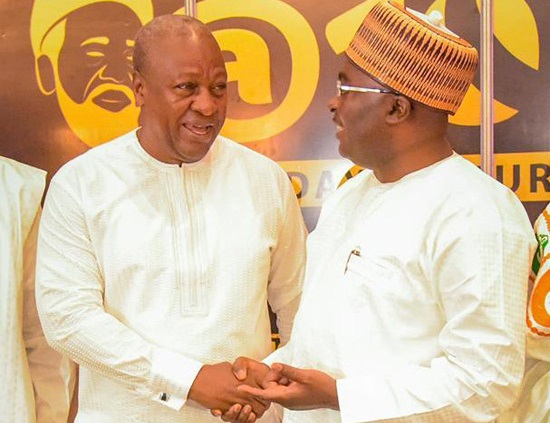 The former President on tour in the Bono East Region said God is not so wicked to give Ghanaians another four years of Nana Akufo-Addo.

READ ALSO: NDC will give motorbikes to Okada riders to pay in instalment - Mahama

Dr Bawumia replied Mahama on Twitter and said: "God has already saved us from you," Bawumia tweeted and accompanied his tweet with a video of Mahama's comment.

God has already saved us from you pic.twitter.com/4pDkuk9I21

Mahama and the NDC have also sparked a debate on the legalization of Okada.

Mahama says not only will he legalize when he wins power but will also make available some motorbikes for Okada riders to acquire on hire purchase.

The NPP on the other hand have made their case clear and say they will not legalize Okada but find alternative means to keep these riders employed.

Dr Bawumia speaking at the signing of a Memorandum of Understanding (MoU) between Volkswagon and BlackIvy for the production of affordable vehicles and houses for Ghanaians, said the leasing of cars to Okada operators is a better option than the legalisation of Okadas.

The party has also clarified that it is committed to phasing out okada. Mahama selected Prof Naana Jane Opoku Agyemang as his running mate and the pair will look to wrestle power from President Akufo-Addo and Dr Mahamamudu Bawumia in the December polls.