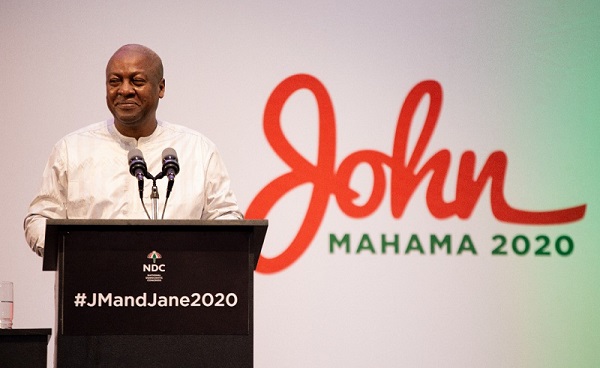 The flagbearer of the opposition National Democratic Congress (NDC) John Mahama has pledged to pay all customers of the collapsed financial institutions whose monies are locked-up in full should he win power.

Speaking at the outdooring of Prof. Opoku-Agyemang at the University of Professional Studies Mahama made the pledge to Ghanaians.

Many financial institutions collapsed when the government embarked on a massive clean-up exercise of the banking sector.

This resulted in several depositors having their monies locked up with these banks unable to pay.

John Mahama has made a solemn pledge to Ghanaians that he will pay all within a year if voted into power.

"My heart goes out to the many who have been affected by this Government’s unjustifiable collapse of Ghanaian-owned financial institutions.

"I pledge on behalf of the NDC that we shall pay within one year all who have funds locked up with the collapsed financial institutions. Within one year. I promise! We shall not put up any long-term payment plans that will further worsen the living conditions of the victims."

He also said if voted into power, he will establish a Financial Services Authority.

"As has been introduced in other economies, the next NDC Administration will establish a Financial Services Authority that will be responsible for ensuring that consumer financial markets work for consumers, providers and the economy as a whole.”

"The Authority will oversee all financial products and services that are offered to consumers, and will effectively and efficiently prevent and stop the challenges that have confronted customers of Menzgold, DKM among others.

"We will restore Ghanaian indigenous investment in the banking and financial sector through a tiered banking structure in order to restore viable credit sources for Ghanaian SMEs. We will make amends for those whose businesses were collapsed due to political victimization.

Mahama will come up against President Akufo-Addo in the December elections having been defeated by the latter in the 2016 elections.