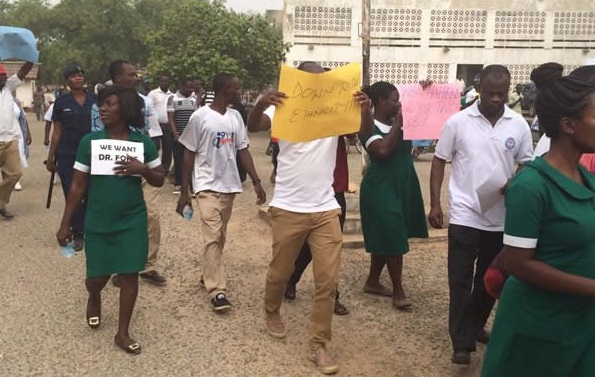 Speaking at a press conference on Thursday, the Ranking Member on the health committee, Kwame Mintah Akando, said harassing demonstrators has become one too many in the country recently.

“Reference can be made to the demonstrating law students and how the leadership of Graduate Unemployed Nurses and Midwives Association (GUNMA) was harassed for seeking for jobs they deserved,” he stated.

GUNMA stormed the Health Ministry in a bid to mount pressure on the government to employ them.

They were subsequently arrested by the police.

The Ranking Member on the health committee revealed that there are currently 41, 000 unemployed nurses in Ghana and questioned the government’s integrity.

“It is, therefore, bewildering that a government that has consistently been claiming to have recruited over 50,000 could be so exposed by the same beneficiaries of these recruitments,” he stated.

Mr Akando added that the government during a meeting with the nurses asked them to forfeit their allowance for immediate employment after school.

He said, “the government has therefore failed to provide immediate employment for which they forfeited their promised training allowances.”

He, therefore, appealed to the government to fulfil its promise to the nurses.