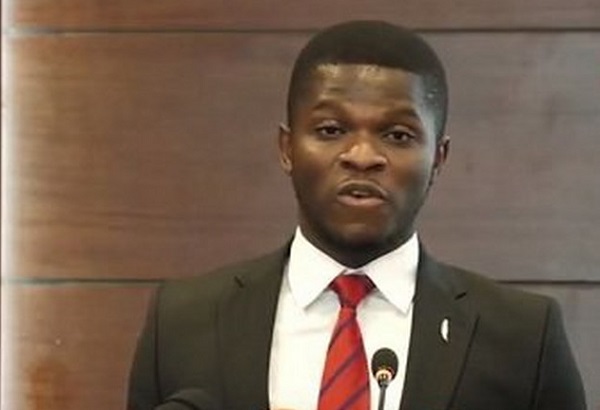 The National Democratic Congress (NDC) in a statement signed by their National Communication Officer Sammy Gymafi says their flagbearer John Mahama stated the truth when he said the Akufo-Addo government and the NPP are training thugs at Asutuare to cause mayhem during the 2020 elections.

The NDC said they have taken notice of a statement signed by the Director of Communications of the New Patriotic Party (NPP), in which he accused the flagbearer of the NDC, His Excellency John Dramani Mahama of fueling “verbal flames”.

JOHN MAHAMA SPOKE THE TRUTH WHEN HE STATED THAT THE AKUFO-ADDO GOVERNMENT IS TRAINING NPP THUGS AT ASUTUARE TO CAUSE MAYHEM DURING THE 2020 ELECTIONS.

The National Democratic Congress (NDC) has taken notice of a statement signed by the Director of Communications of the New Patriotic Party (NPP), in which he accused the Flag-bearer of the NDC, His Excellency John Dramani Mahama of fueling “verbal flames”.

While we ignore some of the derisive effusions of Yaw Buabeng Asamoah in that statement, we wish to put on record that the said pronouncement of former President Mahama on the recruitment of NPP thugs for the purposes of Election 2020 is the truth and nothing but the truth.

It would be recalled that in a recent meeting with Executives of the Ghana Journalists Association, the Flagbearer of the NDC expressed concern over the sad and despicable events of the Ayawaso West Wuogon bye-election and the continuous recruitment of NPP thugs by the Akufo-Addo government, who are being trained in batches in combat techniques and other military drills at Asutuare ostensibly to unleash mayhem and bedlam in next year’s elections.

Ghanaians would recall that earlier this year, Joy News uncovered an elaborate plan to train NPP party activists for election 2020. That undercover investigation exposed how a letter signed by the Upper West Regional Security Liaison Officer, one Capt. Simon Ansu Tengabo (Rtd) directed all NPP Constituency Chairmen in the Upper West Region to recruit able-bodied men under the banner of an “Election Security Team”.

It is instructive to note, that the above directive did not cease even after the reprehensible events of Ayawaso West Wuogon. In fact, the governing New Patriotic party is currently carrying-out this directive in all the regions of Ghana, through the overarching structure of the Regional Security Councils, and escalating same down to the various districts and constituencies.

Our position is fortified by the sad events of the Ayawaso West Wuogon bye-election and the gut-wrenching details that were uncovered during the Emile Short Commission hearing which speaks to a more pervasive enterprise of the Akufo-Addo government in breeding state-sponsored monsters under the guise of National Security Council, whose sole motive is to unleash terror on political opponents in order to sustain the unpopular Akufo-Addo regime in office.

The confessions of one of the chief architects of the violence, Bright Nana Akomea (aka Double) as to how he got recruited into the National Security apparatus, and subsequently entrusted with an assault rifle with which he maimed innocent unarmed civilians, certainly lends credence to our charge that state security facilities such as that of Asutuare are being abused for training NPP thugs.

Here is a young man, who prior to his recruitment into the now depraved National Security of Ghana, was a mobile phone seller at ‘Tip-Toe Lane’ at the then Kwame Nkrumah Circle. ‘Double’, like the many other hooded NPP hooligans we saw at Ayawaso, who now populate Ghana’s National Security and other security agencies, received only six weeks of training in weapon handling and physical drills at Asutuare, and that was enough for them to be deployed for election-day duties under the guise of a National Security Operation.

Worrying enough, we have in our possession pictures and other pieces of indisputable evidence about ongoing training of more of these thugs at Asutuare towards election 2020 as was revealed by President Mahama.

It is obvious from the overwhelming evidence available to us on this matter, that President Akufo-Addo himself is the chief mastermind and promoter of these illegal acts which threaten the very core of our democracy.

Right from his assumption of office in 2017, President Akufo-Addo has failed to deal decisively with his party thugs who brutalized innocent Ghanaians in their offices, homes and even court rooms. His posture on the subject of political vigilantism and state-sponsored electoral violence has been one of tacit endorsement from day one.

It is a matter of public record, that President Akufo-Addo's tenure as leader of the NPP has ushered the party into a dark phase under which violence has been incorporated into its philosophy and ethos. There is abundant evidence that thugs loyal to him were unleash on his critics within the NPP in the run up to the 2016 elections and on over a dozen occasions, their Headquarters became the staging post of bloody clashes.

This affinity for violence has continued during his time as President. In the last two (2) and half years, NPP thugs operating under several names, have gone on rampage, perpetrating acts of violence against any and everybody they deem a target.

They have attacked senior security officials at the Flagstaff House and the Regional Coordinating Council in Kumasi. Not even the courts have been spared as these marauding gangs have breached their sanctity as well with violent attacks.

All of these acts of lawlessness have gone on without any firm action from President Akufo-Addo. And, this is a clear testament of the fact that these party militants are acting with official sanction.

But perhaps the most scandalous and disappointing endorsement of the activities of the criminal thugs of the NPP by President Akufo-Addo is his decision to whitewash and absolve the perpetrators of the violence of Ayawaso West Wuogon through a contemptuous Government White Paper.

For instance, government’s decision in its White Paper not to prosecute Suleymana, one of the hooded thugs who physically assaulted Hon. Sam George, MP for Ningo-Prampram on the flimsy grounds of provocation is ample testament to the fact that President Akufo-Addo is the cheer leader who emboldens and encourages the atrocities of these marauding thugs.

The gun violence at AWW put it beyond doubt, that Akufo-Addo is prepared to put the resources of the state at the disposal of his militants to disrupt the peace in pursuit of political power. And, it is in preparation for similar violent conduct in the 2020 elections that NPP thugs are currently being trained at Asutare and other sensitive security installations as accurately revealed by President Mahama.

It is worthy of note, that per the electoral laws of this country, the front line institution that is responsible for election security is the Ghana Police Service supported by allied security services. Hence, the NDC will use every legal means possible to resist any attempt by President Akufo-Addo and the NPP to introduce any contrary security arrangement that can undermine the sanctity of the 2020 general elections. Never again, will the NDC tolerate the intimidation, violence and brutalities which were meted out to our supporters and innocent civilians during the AWW bye-election by the Akufo-Addo government.

In conclusion, we wish to reiterate the fact that the ongoing, ominous and state-sponsored, training of NPP thugs at Asutuare and other sensitive security installations for election 2020 portends danger for our democracy and must be halted immediately.

The NDC therefore appeals to the National Peace Council, Religious leaders and Traditional leaders of Ghana, the Diplomatic Community, the Media and all peace-loving Ghanaians to call on President Akufo-Addo to halt this illegality so as to preserve the peace and stability of our beloved country.