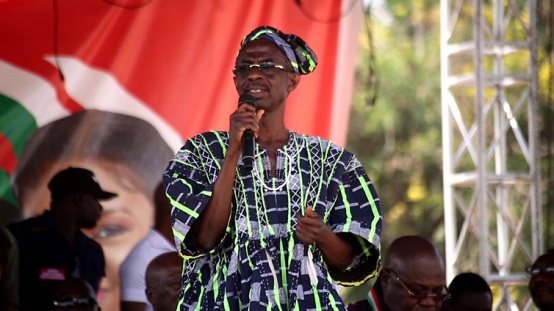 Johnson Asiedu Nketiah, the chairman of the National Democratic Congress (NDC), has said the decision to reshuffle the leadership of the Minority Caucus in Parliament is in line with the party’s reorganisation.

Speaking in a media interview, he said the reorganisation, which started over a year ago, formed part of efforts to win the 2024 general election.

“We started more than a year ago at the branch level. We have since done elections in about 40, 000 branches and then from there we proceeded to the constituency level,” Asiedu Nketiah said.

“We are done largely with all the constituencies. We have done regional elections and we just completed our national election and the next is to look at our leadership in Parliament. That is what we have just done.”

He explained that different timings demand different leadership and that the reshuffle was in the best interest of the party.

He said the outgoing minority leadership had played their part and the new ones were chosen after careful consideration.

In arriving at that decision, the party took into consideration several factors such as the financial, economic, energy and infrastructural situation of the country. People with certain expertise were, therefore, needed to help in dealing with the situation, Asiedu-Nketia said.

As election 2024 drew nearer, issues on the floor of the House would change to issues on the economy, infrastructure and energy, hence the importance to put the best people in those fields to properly argue the party’s stance.

Dr Cassiel Ato Baah Forson, the new NDC Minority Leader in Parliament, and Member of Parliament (MP) for Ajumako-Enyan-Esiam in the Central Region, is a financial expert while Armah Kofi Buah, the new deputy minority leader, and MP for Ellembelle, is energy-inclined.

Kwame Agbodza, the MP for Adaklu, is an expert in infrastructure.

“We know for instance that going into election 2024, the economy is going to be the major battleground and so many of the debates will focus on the economy. So, you better put your best man in economy forward that is what we have done,” Asiedu Nketiah said.

“We also looked at energy. You know the petroleum and electricity challenges, so we needed to settle on Emmanuel Armah Buah, our former minister, to be the deputy minority leader,” he said.

“The other area is infrastructure, Kwame Agbodza, being our man in infrastructure should play a key role that was generally what informed the changes.”

Asiedu Nketiah said another factor was regional balance, and that it had been long since the Western and Central regions had their tenure at the NDC’s parliamentary leadership.