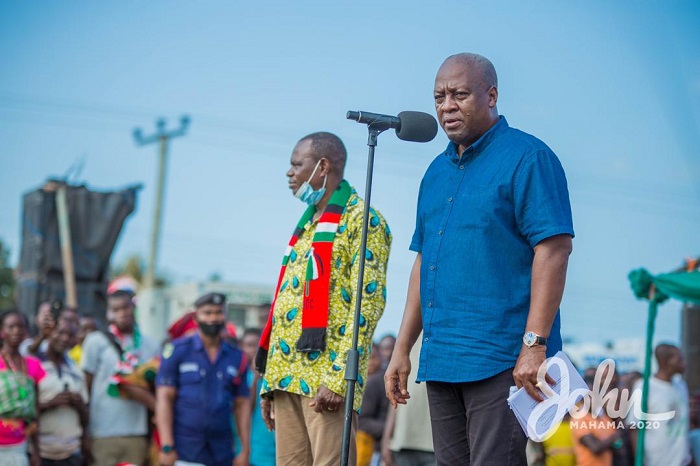 Mahama says the free SHS initiative which has becomes the New Patriotic Party's flagship programme was started by him but the current government poorly implemented the programme, which compelled them to adopt the double-track system.

“I assure you, my countrymen, that within one year, I will cancel the double-track system,” Mahama said.

“We started the programme and the NPP came and continued it. Unfortunately, the implementation has been very poor, and so it ended us in double track,” Mr Mahama stressed at Tuobong, a community in the Tempane District of the Upper East Region.

Mahama promised the people that should he be voted into power all Community Day Schools that they started building they will ensure the finish them so that all the children can get schools to attend.

“With the Community Day Schools we are building, we are going to add dormitory blocks for girls and boys so that those who don’t come from the community where the school is sited, if they choose that school and they are posted there, they will be able to get a decent place to live and learn.”

On illegal mining popularly referred to as “galamsey,” Mr Mahama said “If we handle the issue of galamsey properly, we can create one million jobs for young people in this economy, and so NDC is going to come out with a new plan for small scale mining.”

He explained that the NDC will map out all districts where gold mining took place, and in all those districts, “We are going to establish what we call a Gold Board. We are going to take young people from the University of Mines and Technology who know how mining should be done.

“They are going to come and work with you the small scale miners and show you how to do the mining safely and properly. Let me tell you something, if you are digging a pit to mine gold, you need to take the soil samples and test and see what kind of soil it is. There is some soil that easily carve in. There are other soils that are firmer.”

“They will show you how to put support so that the pit does not carve in and bury you underground. That is the work they have been trained to do. They will come and work with you and show you how to do it safely so that we don’t lose any life,” the NDC’s flagbearer said.

He said after they had finished mining, they would be taught by the graduates how to cover the pits and put the top soil back on and plant trees on it to reclaim the land.

Mr Mahama said all miners who had their excavators, concessions and equipment seized, would be collected and given back to the owners, adding that there were lots of potentials for gold mining in the northern sector.

“We are going to explore all those areas and make sure that we open big scale mines that can employ as many of our young people here as possible.”