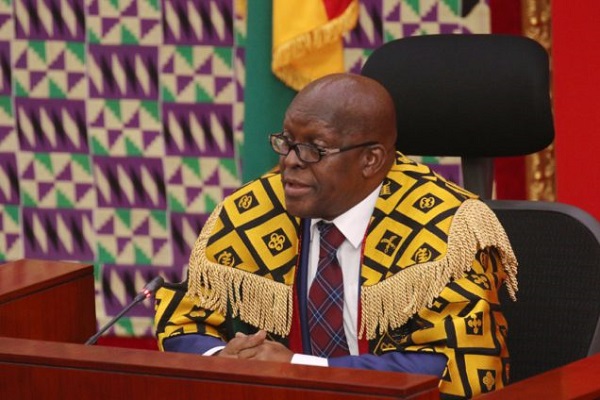 The Speaker of Parliament, Alban Sumana Kingsford Bagbin, has indicated that the House will consider adding the process of campaign financing to the scope of activities to be regulated via a bill that will be proposed sometime next year-which seeks to cut down the cost of political business.

Political business in Ghana, especially for elections requires heavy financing. Available data shows major political parties in Ghana are funded privately either through donations made by institutions, kickbacks and corruption, fund-raising or membership dues, and nomination fees paid by aspirants of executive positions in political parties as well as parliamentary and presidential aspirants during party primaries and congress.

Addressing members of the Parliamentary Press Corps at Parliament House on Friday, Mr. Alban Bagbin said the legislature would be making a move to curb the high cost of pollical campaign financing.

READ ALSO: Bagbin speaks on withdrawal of his military attachment for first time

“So by next year, I am going to work together with civil society -they have given me a report already, on how we legislate to facilitate and regulate the process of campaign financing and also of funding of campaign by individual candidates [whether as MPs, assembly members or presidential candidates, we cannot leave it as it is, nobody is asking where they get the money, how they spend it, nobody cares, and at the end of the day the person is supposed to be Father Christmas, so we going to come out with a law on this matter We can say reduce it to posters, the idea is to reduce the cost, the money, we need to do something to cut down on the cost of political business and I think we will work towards that, so we need to change the system to reduce corruption,” he said.

According to Speaker, such a move will help lessen the corruption tag associated with political campaign financing and strengthen the country’s democratic credentials as well as engendering confidence in parliament.

However, under a longstanding arrangement that has yet to be enshrined in law, Members of Parliament receive a portion of the District Assemblies Common Fund allocated to districts within their constituencies.

Also, in past elections, the Government, acting through the Electoral Commission, has allocated vehicles to qualified political parties for use in election campaigns.