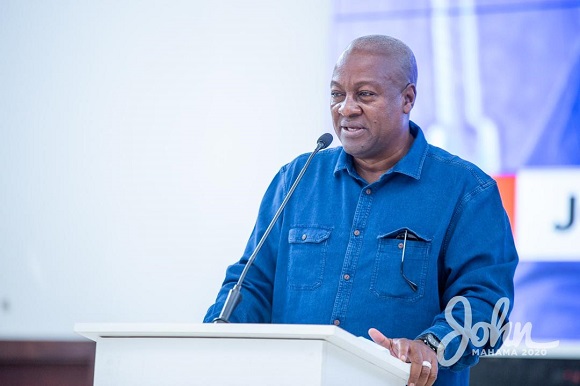 Former President John Dramani Mahama has said the opposition National Democratic Congress (NDC) will complete all projects they commenced in the Volta Region before they left office for the Akufo-Addo government to take over.

Speaking at the grand durbar to mark the climax of the Asogli Yam Festival in Ho, Mahama said the various projects started by the National Democratic Congress (NDC) government have been discontinued.

“Projects started by the NDC have been abandoned and others that are to be completed in the region are being done at a slow pace. For some of the projects, this government asked contractors to stop work”, Mr. Mahama emphasized.

The former assured the people of the Volta Region that the next NDC government will complete all abandoned projects in the Region.

“But I make a commitment of the NDC that, God willing and thanks to your votes in 2025, all these projects will resume”, the former President assured.

John Dramani Mahama also stated that the Nana Akufo-Addo-led administration has failed in the fight against corruption.

His comment comes on the back of infractions cited in the 2021 Auditor General’s Report.

The former President said the country is confronted with major challenges and needs to eschew greed to foster development.

He noted that “self-centredness has been eroded despite the strong foundations laid by our forefathers.”

“The NPP government has completely lost control of the fight against corruption. President Akufo-Addo in his inaugural address promised to protect the purse. Today, that public purse cannot be found. Revelations in the Auditor General report for 2021 are only a microcosm of the seeming institutionalization of corruption under this administration.”

Mr. Mahama thus called for a concerted effort in dealing with the canker.

“I am using this festival to draw attention to this important national issue that requires the support of all citizens. Economic difficulties in the country are unbearable. Cost of living has increased significantly because of rising inflation. Prices are changing in the market every day, and this makes it difficult for the ordinary Ghanaian to survive.”