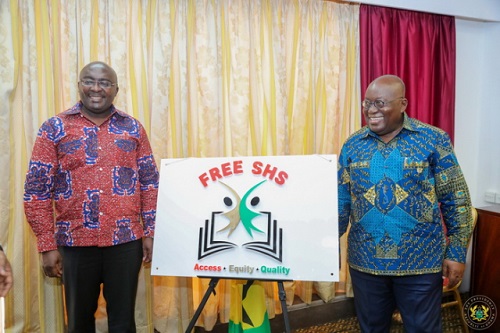 Dr Matthew Opoku Prempeh, Minister for Education says the New Patriotic Party (NPP) has improved Ghana's educational sector to a level where Ghana's first President Kwame Nkrumah could not even get to.

Mr. Opoku Prempeh made this statement after handing over an AstroTurf pitch to his constituents in the Manhyia South Constituency.

READ ALSO: Some media houses have 'an agenda' against Ministry of Education - Matthew Opoku Prempeh

Speaking to journalists he said: “Free Education is a project in evolution. We have done well under the leadership of his Excellency the President. The third-year students of the Free SHS programme are in school. Generally, we haven’t heard anything, but when you live in Accra and Kumasi, you will think that things are falling apart. But when you go across the country, if we have been able to move the population to 800,000 to nearly 1.2 billion, 400,000 more students, ask yourself, if we still remained in the old dispensation, what would have happened to these students?”

The Minister added that “what we have achieved in the educational sector is unprecedented in the annals of the history of this country. Not even Kwame Nkrumah achieved what we have done”.

The Minister revealed that the number of beneficiaries under the Free SHS policy has risen to nearly 1.2 billion from 800,000.

He added that he wants Ghanaians to reward the good works of the NPP by retaining President Akufo-Addo in the 2020 elections.

READ ALSO: We have not sanctioned anyone to be Free SHS ambassador - Edu. Ministry responds to NDC's allegations

The Free SHS policy is a Government of Ghana initiative introduced by the President Nana Akuffo-Addo administration in September 2017. The policy had been a major campaign policy prior to the election of President Akuffo-Addo in 2016.