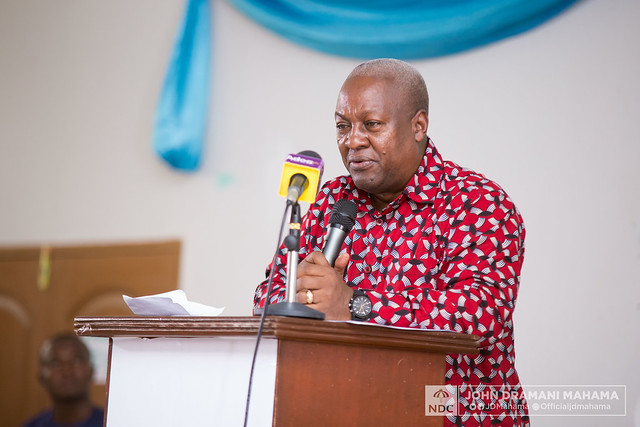 Former President John Mahama has accused the NPP government of training vigilantes to disrupt the 2020 polls.

According to him, the National Democratic Congress ( NDC) has evidence that some individuals have been trained at Asutuare for the purpose of the polls.

Speaking to executives of the Ghana Journalists Association who had gone to pay a courtesy on him today, John Mahama said :

“I remember at the time of Ayawaso West Wuogon, there was a letter that came out asking party executives to bring able-bodied people to be trained as security''.

“Since then, we have evidence that those people have been to Asutuare and trained in batches over and over again in all kinds of combat techniques and other things.”

He also condemned the government white paper on the Ayawaso violence report.

“To believe that the government can say an MP deserves to be slapped because he provoked a security officer is unconscionable. I don’t know by what moral code this judgement is being made but it creates a very bad precedent for us. It means that… anybody can be brutalized by a security officer if he believes that you have provoked him… not even an MP is immune to brutality.”

Mr Mahama argued that the actions of government provide a sinister premonition of future attacks by government-trained thugs targeted at the government’s political opponents. He said there was evidence that government is training ‘able-bodied’ civilians at a government military training facility.