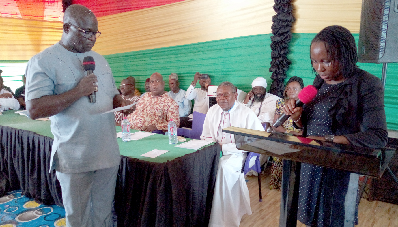 Mr Adjei Tawia secured an overwhelming endorsement as he won unanimously from the 13 assembly members who voted in a “yes or no” ballot.

Prior to his confirmation, the assembly members elected Mr Francis Ebo Mensah as the Presiding Member of the municipality.

Mr Adjei Tawia after his swearing-in expressed his gratitude to the voters and promised that he was going to work with every assembly member to ensure that the municipality progressed.

He gave an assurance that he was going to work in the interest of the people in the municipality by engaging all key stakeholders, including the chiefs and the community leaders.

“I believe in unity not division, I believe in reaching out not just looking within. Therefore, if Korle Klottey are expecting a new wave of development now that they have a municipality, I wish to assure the people of this municipality that I will not let them down,” he stated.
Challenges

He indicated that the major challenges facing the municipality were poor sanitation and poor drainage systems.

He said most of the drainage systems were broken and he was going to ensure that they were fixed to prevent floods during the rainy seasons.

Touching on the sanitation problem, Mr Adjei Tawia revealed the areas which were highly affected by the situation was Osu Alata and Odorna, which he said, he was going to work assiduously with the assembly members to ensure that the problem was solved.

Mr Adjei Tawia further indicated that high rate of unemployment was also another issue which was affecting the municipality, adding that “ this constituency is endowed with so many businesses and many of them have their headquarters here but when it comes to job recruitment, the people here are neglected mostly because they don’t have the qualifications. One of the initiatives I am going to introduce is job training centres to train people and make them qualified for the available jobs.”

He added that he was also going to work vigorously with the business community and provide them with better conditions to make their businesses expand.

The Greater Accra Regional Minister, Mr Ishmael Nii Armah Ashitey, congratulated the newly appointed MCE and gave him an assurance that he was going to work with him to ensure that the municipality progressed.

He further thanked the assembly members to ensure that there was peace in the confirmation process, he pleaded with them to continue supporting the MCE to ensure he achieved his vision.