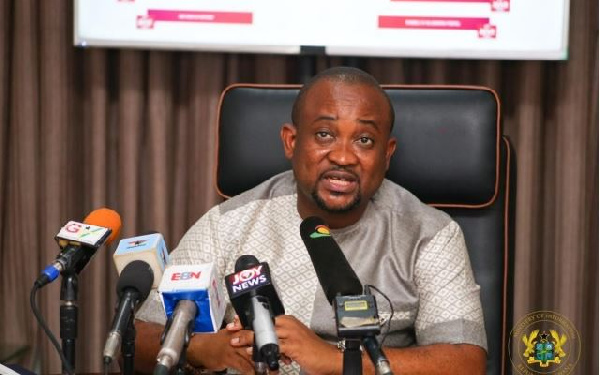 Deputy Information Minister, Pius Enam Hadzide has justified President Akufo-Addo's statement against former President John Mahama over the Voter's Register at the 20th-anniversary celebration of the founding of the Tertiary Students Confederation (TESCON) in the Volta Region, Ho yesterday.

According to the Minister, there is nothing wrong withÂ Akufo-Addo's statement on Voter's Register.Â

President Akufo-Addo described John Mahama as aÂ poor, desperate loser. Akufo-Addo also lashed out his predecessor over suggestions that there will be chaos over the EC's decision to compile a new voters' register in the 2020 elections.Â Â

She also challenged Ghanaians who watched the President yesterday to put the tapes together and then draw their conclusions on the matter.

Joyce Mogtari further stated that what happened yesterday was way below the performance of a President reiterating the call on President Akufo-Addo to render an unqualified apology for trying to damage the reputation of Mr. Mahama.

Commenting on the development on Starr FM, today Pius Enam Hadzide said:'' Without a doubt, reference was made to him because he was the one who was assuring and promising the chaos and confusion, strive and so on. Am saying that chaos does not fall from heaven,Â is caused by people who are exhibiting what you may see as desperation. I think an honest patriotic call from His Excellency to the people of Ghana that no such doomsayer or doom talk will be accepted''.

Meanwhile, addressing a packed Ho Technical University auditorium, yesterday the President stated that: â€œI think that it is important for the credibility of our national public discourse that public persons are seen to be consistent in their views and advocacy.â€

He continued by saying: â€œIt cannot be right that when you are President, you say one thing, and, when you become a leader of the Opposition, you say another.â€

Furthermore, Akufo-Addo recounted how when in opposition, and when agitations about the credibility of the current electoral register took place: â€œsome amongst us went on lawful, peaceful demonstrations, and some also went to court to ventilate their grievance and seek redress, in other words, we took the lawful routes, the constitutionally sanctioned routes.â€