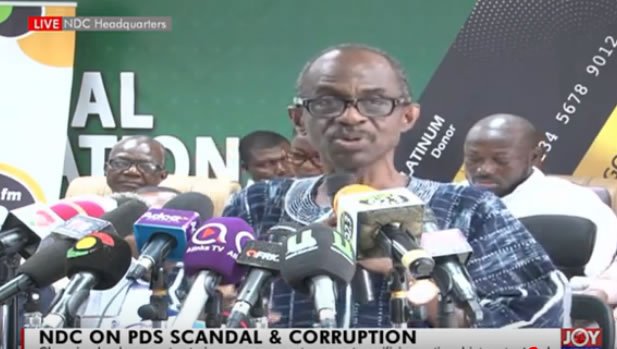 According to the NDC General Secretary, Mr. Johnson Asiedu Nketia A.K.A General Mosquito, who was addressing the press, President Akufo-Addo claims to have saved the country GHS 2.7 billion.

“Presidet. Akufo-Addo again claimed that he has saved the country about GHS 2.7 billion through the rejection of sole-sourced contract presented to the PPA”, the NDC scribe said.

“We wish to submit that this claim is false and challenge the President to publish a full list of all the specific cases of savings”, he added.

General Mosquito further accused the President of failing to uphold his stance on corruption for two years, while overseeing the looting of state resources by family and friends, going on to express distrust in the Public Procurement Authority (PPA) to fairly probe the rejection of sole-sourced contracts, when its boss Mr A.B. Adjei is mired in a contract sale scandal.

“We note that the request for full disclosure on this matter has been outstanding for two years and the reason why the President has failed to show proof of his claim is that there, in fact, is no evidence to back it. In any event, how can any reasonable person trust the A.B. Adjei-led PPA in the face of the contract for sale scandal?”

General Mosquito also accused the President of ‘witch-hunting’ his political opponents, while presiding over glaring corruption in a nepotistic government in a guise of fighting corruption. He said, “the President believes that parading political opponents before the court while opening up the public purse for systematic rape and abuse by his relatives and friends in government is the way to convince himself of a fight against corruption.”

The NDC held the press conference to address the PDS and address other corruption scandals and took the opportunity to respond to the President’s speech at the Ghana Bar Association Conference in Takoradi a day earlier.

READ ALSO:  Akufo-Addo was not honest in his comments on corruption - Sammy Gyamfi