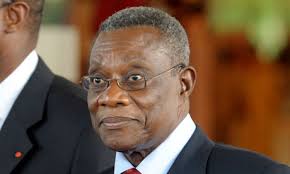 As the National Democratic Congress (NDC) launches its 2016 campaign in Cape coast today, posters with the inscription "WHO KILLED ATTA MILLS?" have reportedly been sighted in the Central regional capital.

The posters, according to starrfmonline were spotted at Pedu junction, Abura, Adisadel, Moree barrier, Aggrey Memorial SHS, Cape Coast-Takoradi highway and around new the Cape Coast Stadium, the venue for the campaign launch.

It is not clear who are behind the pasting of the posters at the time the party is launching its campaign at the home region of the late professor who died July 24, 2012, three days after his 68th birthday.