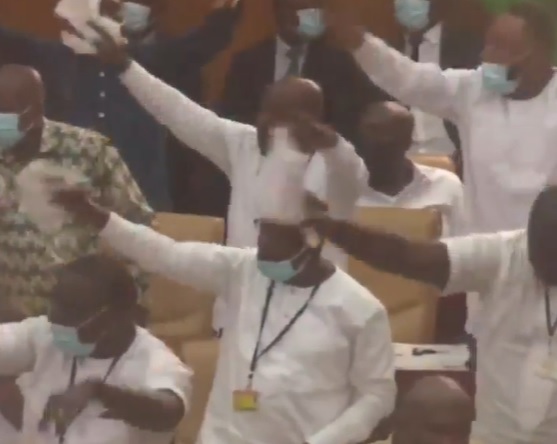 Speaker of Parliament Alban Bagbin has now declared the New Patriotic Party as the Majority in Parliament.

This was after he read the letter from Independent MP for Fomena Andrews Asiamah who declared his wish to do business with the NPP side of the house.

The Speaker, Bagbin today January 15, 2021, had to bring clarity to the issue which became the talk of town as both NPP and the NDC had 137 members each after the 2020 polls.

READ ALSO: NPP MPs troop to Parliament at dawn to occupy Majority seats ahead of resumption

MP for Fomena constituency, Andrews Asiamah was booted out of the 7th Parliament after he decided to quit the NPP.

He subsequently stood as an Independent candidate and won the Fomena seat again but said he will align with the NPP in the 8th Parliament.

The Speaker Alban Bagbin after reading his official letter to Members of the House which communicated his position said:

"With this official declaration, the House will accord him the space to do as he has stated, so what we have now is that the NPP together with the Independent candidate of Fomena constitute the Majority group"

It will be recalled that before the dissolution of the 7th Parliament, the NDC MPs trooped to Parliament to occupy the Majority side of House and that led to great chaos.

Today, the NPP MPs did similar as they came to the House at dawn and sat right at the Majority side.

The NDC had consistently said there will be no such thing as a Majority or Minority in the 8th Parliament because of the equal number of members.

The declaration by the Speaker, Alban Bagbin puts to bed a two-week deadlock over who would have the Majority Group in Parliament.