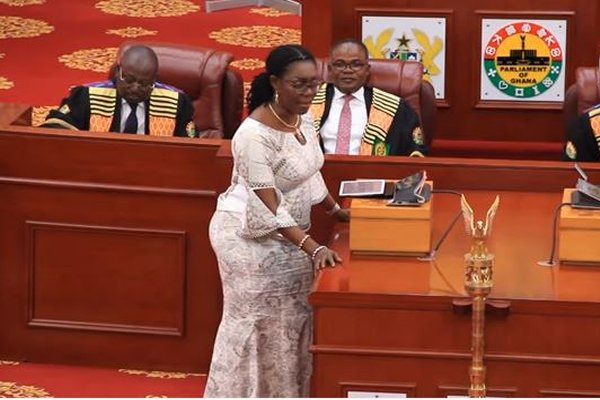 The Speaker of Parliament Prof. Mike Oquaye has issued a 48-hour ultimatum to Communications Minister Ursula Owusu-Ekuful to appear before the House to answer questions on the controversial Kelni-GVG contract.

Mrs Owusu-Ekuful has failed to appear before the House on three occasions and the speaker says she has 48 hours to come and do so.

This was after the Minority Spokesperson on Communication, Samuel Nartey George says she is to appear before Parliament and answer a few questions on the contract which many bodies such as Imani Africa have criticised as not good for the country.

Mr George also sort to know the status of the National Data Centre after the Commercialisation agreement .

Majority Leader Osie Kyei Mensah Bonsu however pleaded with the House to give Mrs Owusu-Ekuful some time to appear before them but the Minority Chief Whip Muntaka Mubarak disagreed with that.

Despite criticism since the US$89 million contract was awarded to Kelni GVG to deal with revenue losses and simbox fraud in the telecommunications sector Mr Owusu-Ekuful has maintained the deal is clean.

The contract has become a subject of controversy between policy think tank, IMANI Africa, and the Ministry of Communications.

The President of IMANI Africa, Mr Franklin Cudjoe, has in several media engagements stressed that the $89 million contract was a careless duplication of jobs and a needless drain on the country’s scarce resources.

He has insisted Subah and Afriwave were awarded similar contracts under the National Democratic Congress (NDC) administration to perform similar jobs, even though both contracts were needless.

Following the disagreements with some indications that the National Communications Authority (NCA) was against the deal and had led to the resignation of a board member, the NCA released a statement to clarify that the board member's resignation was not related to the contract.

Mrs Owusu-Ekuful Juxtaposing the new contract with the old one, she said the current government has saved the country some money.

The Minister said even though Subah was currently in court challenging the termination of their contract and arguing that it was not given the prerequisite three months notice before termination, the ministry will still go along with the new deal and is going to abide by the conclusion of the legal process.

She also clarified that Kelni is not a foreign company as suggested but was a joint venture between a Ghanaian company registered in 1995 with experience in electrical engineering, IT solutions and systems in addition to other business interest and GVG which has 20 years experience in telecoms revenue assurance.

A new WhatsApp update will allow users to delete an image, video or gif on…