The Akufo-Addo I know doesn't run from debates, this must happen - Franklin Cudjoe 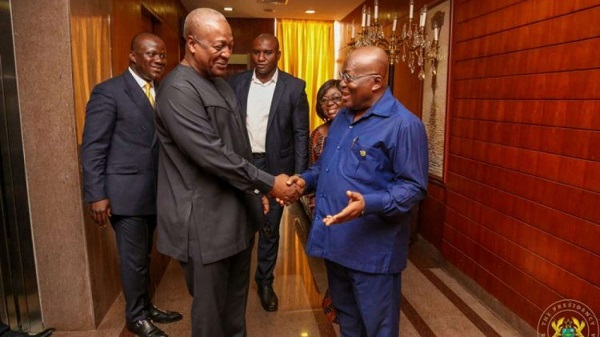 John Mahama on a tour in the Volta Region threw a challenge to President Akufo-Addo and told the latter to debate him on issues of infrastructure.

Franklin Cudjoe is of the view that a debate between the two will help shift arguments from parties taking credit for a project to its significance, the resources involved and other broader issues.

READ ALSO: Mahama has no moral right to challenge Akufo-Addo to a debate - Mustapha Hamid

“There are very important questions that we also need answers to, the value for money asked questions and the resource envelope – where the money will be coming from for all these initiatives that the two parties have undertaken, the debate must be had" , he said on Joy.

The NPP has rejected the challenge for the debate as several of their officials deem it unnecessary but Mr Cudjoe disagrees.

“The Akufo-Addo I know does not run from debates. I am sure if he is given the opportunity he will definitely do it.”

John Mahama's challenge comes after the NPP held a Town Hall meeting to point out some of the infrastructures they have put up since taking over in 2017.

John Mahama on tour in the Volta Region however disagreed and said the issue of who did better with infrastructure can easily be settled by a debate.