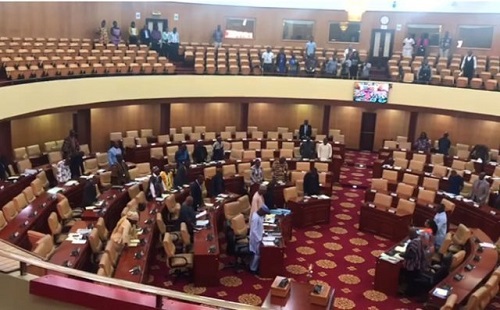 Parliament observed a minute silence for victims of the tragic shooting in New Zealand but there was no tribute on Ghanaian tragedy that left 62 passengers dead at Kintampo.

The MPs also paid tributes to victims of a natural disaster in Southern Africa in which a cyclone left in its wake over 750 deaths and displaced in devastated infrastructure.

The New Zealand tragedy occurred March 15, 2019, some ten days ago.

The road carnage on the Kintampo-Techiman road in the Bono East region happened last Friday. Another accident the same day on the Cape Coast road increased the death toll of the two accidents to more than 60.

The NPP MP said the murder of Muslims inside the Al Noor Mosque at Christchurch, New Zealand “sought to callously bereave 50 families and send about 15 countries whose nationals were victims, crying and wailing.

”Mr. Speaker, the Parliament of Ghana is united in grief with New Zealanders”, he said in a four-page statement that expressed fears  “global peaces appears to be on the brink of collapse”.

He decried what he said was growing radicalisation, terrorism, extremism and xenophobia, traits associated with the suspect, Brenton Harrison Tarrant.

NDC North Tongu MP Okudzeto Ablakwa read a statement on the Southern African tragedy that has left at least 259 people in Zimbabwe, 56 in Malawi, and at least 417 in Mozambique dead.

Addressing the House in his three-page statement, the North Tongu  MP called the situation in these countries dire and urgent.
“I propose most humbly, Mr. Speaker,  if it pleases you, that we all as members of Parliament make voluntary donations, in cash or in kind which will be put together and donated to our fellow Africans in Mozambique, Malawi and Zimbabwe.”

He brought in a quote by Mother Theresa, “If you can’t feed a hundred, feed one” and referred to Ghanaian support given to Japan after devastating earthquakes in the 90s, $3million to Haiti over earthquakes there and 2014 support to countries affected by the deadly Ebola virus.

Ghanaians are still reeling from the shocking death toll last Friday. A mother has said she lost her husband and son in the Kintampo-Techiman carnage.

Read also: Techiman-Kintampo accident: One of the drivers was 'sleeping behind the wheel'- Reports