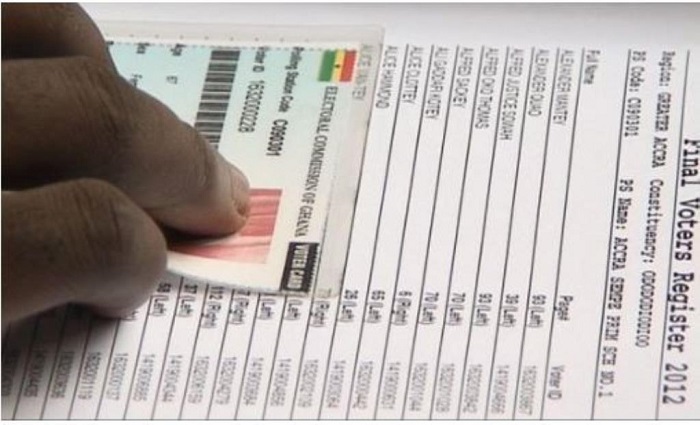 The Electoral Commission (EC) has dismissed claims by the National Democratic Congress (NDC) that it is deliberately deleting names of some people from the voters register in their stronghold.

The NDC at a press conference on September 21, 2020, said the EC was engaged in a deliberate election-rigging plot and they are still registering people even though the registration exercise has ended.

NDC's Director of Elections Elvis Afriyie Ankrah at the NDC presser said: "Our observation shows widespread anomalies at various exhibition centres across the country. This has already given as course to believe that the anomalies and distortion in the register may be deliberate. EC officials were caught on video late at night printing and laminating an unspecified number of voter ID cards."

Director of Electoral Services at the EC Dr. Serebour Quaicoe says the claims are false.

"In the course of registration we identified that some of the kits generated duplicate IDs, so those ones that were identified early we made corrections and gave them new cards. Some also came after the registration and we rectified them through the issue of new ID and we gave them to the districts to laminate them."

On the issue concerning the deliberate attempt to take out some names, Mr Quaicoe said they are working with machines which can fail sometimes.

"We are dealing with machines and transferring stuff, so more or less, we may have issues like this coming up, it's not deliberate".

There have been widespread complaints about some missing names in the ongoing voter exhibition exercise.

The EC begun the voter exhibition exercise on September 18, 2020.

The voter register exhibition exercise which will last for 8 days will afford registered voters the opportunity to match their details against what has been captured in the register and to confirm the registrations.

The EC has also introduced a mobile service through which registered voters can equally check and confirm their registration.

Voters using this service are to send their voter ID Numbers to the shortcode 1422 for their details, but can only effect corrections where necessary at the EC’s respective district offices.