We're not going to IMF because of mismanagement - Oppong Nkrumah 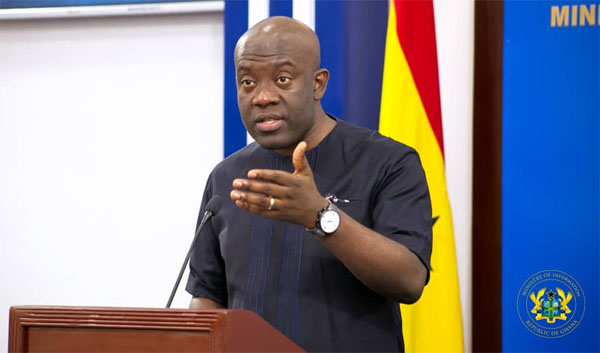 Minister for Information, Kojo Oppong Nkrumah says the government's decision to go to the IMF for a bailout is not due to the mismanagement of the economy.

He explained that the primary reason for going to the IMF is a result of the Covid and the Ukraine-Russian war.

He said this on Citi FM in defense of the government's decision to seek an IMF bailout.

Meanwhile, Officials of the International Monetary Fund (IMF) are expected to arrive in the country on Wednesday, July 6th to begin negotiations with the government on the bail-out the Akufo-Addo administration is seeking.

The team is expected to meet officials of the Finance Ministry, the Economic Management Team and the Presidency during their one-week stay.

READ ALSO :IMF bailout: E-levy will not be scraped off – Kweku Kwarteng

Details of the bailout programme and its conditionalities will all be announced after the meeting.

The Ministry of Information on Friday, July 1, 2022, announced that President Nana Addo Dankwa Akufo-Addo had given approval for Ghana to begin engagements with the IMF for a bailout.

The ministry said the Minister for Finance, Ken Ofori-Atta will be leading the negotiations with the IMF in the coming days.

The news has been received with mixed feelings, as it comes as a major U-turn by the government after it vowed never to go under an IMF programme.

The IMF team will consist of senior officials from the Fund as well as local staff based here in Ghana.