We will complete Bolga-Bawku road before 2020 elections - Prez. Akufo-Addo 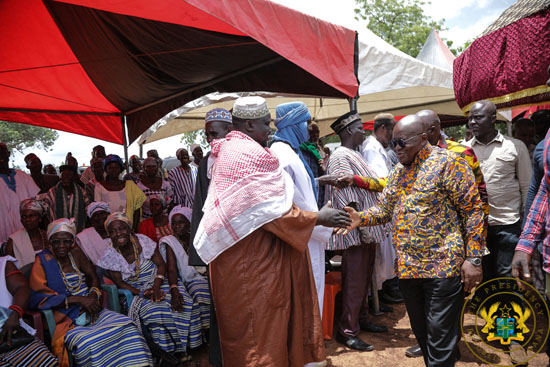 President Akufo-Addo has given an assurance to the people of the Upper East Region as he says the Bolgatanga to Bawku road will be completed before the 2020 elections.

President Akufo-Addo made this known to the people of Binaba on Tuesday, August 13, 2019, as he tours the Upper East Region. He said the road will be completed before the next general elections.

“The deceptions of the past, like the Minister [of Roads and Highways] has said, will no longer be a part of our future,” he said.

The President recounted how, in 2016, he said he was yet to see the so-called “unprecedented infrastructural projects” touted by his predecessor, John Dramani Mahama.

“He [Mahama] told me that I was asleep at the back of my car when I was going around the country, and that was why I was not seeing the infrastructure. And, yet, ever since I came into office, that is all they keep asking for – ‘our roads, our roads’. If the roads had been done, would they be asking for that?” President Akufo-Addo asked.

He, thus, appealed for the support of the Ghanaian people for the programmes and policies being implemented by his government, adding that “without your support, without unity amongst you, it will be very difficult for us to achieve our targets and our purposes. That is my appeal to you.”