The Cunning Fox and the Clever Stork 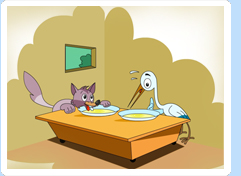 Once upon a time, there lived a very cunning and mischievous fox. He used to speak to other animals sweetly and gain their trust, before playing tricks on them.

One day the fox met a stork. He befriended the stork and acted like a very good friend. Soon, he invited the stork to have a feast with him. The stork happily accepted the invitation.

The day of the feast came, and the stork went to the foxâ€™s house. To her surprise and disappointment, the fox said that he could not make a big feast as promised, and just offered some soup. When he brought the soup out of the kitchen, the stork saw that it was in a shallow bowl!

The poor stork could not have any soup with its long bill, but the fox easily licked the soup from the plate. As the stork just touched the soup with the tip of its bill, the fox asked her, â€œHow is the soup? Donâ€™t you like it?â€

The hungry stork replied, â€œOh it is good, but my stomach is upset, and I canâ€™t take any more soup!â€
â€œIâ€™m sorry for troubling you,â€ said the fox.

The stork replied, â€œOh dear, please donâ€™t say sorry. I have some health problem and cannot enjoy what you offer.â€
She left the place after thanking the fox, and inviting him to her house for dinner.

Cunning Fox and the Clever Stork StoryThe day arrived and the fox reached the storkâ€™s place. After exchanging pleasantries, the stork served soup for both of them, in a narrow jar with a long neck. She was able to have the soup very easily with her long bill, but the fox obviously could not.

After finishing hers, the stork asked the fox if he was enjoying the soup. The fox remembered the feast he himself had given the stork, and felt very ashamed. He stammered, â€œIâ€¦Iâ€™d better leave now. I have a tummy ache.â€
Humiliated, he left the place running.

Moral: One bad turn begets another.