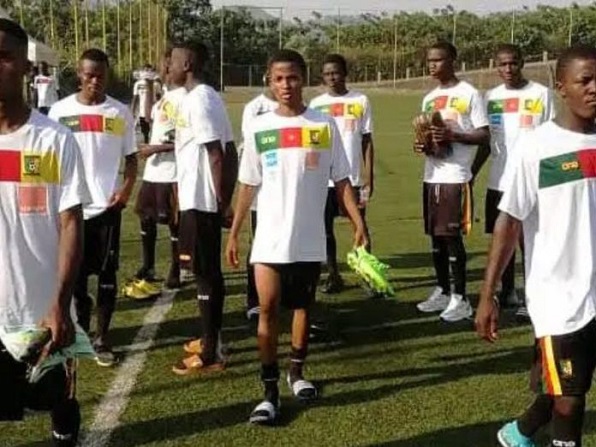 Cameroon have been hit by a fresh age fraud scandal after 21 members of their Under-17 squad were disqualified over the issue.

Back in the summer, Cameroon's football federation summoned 44 players from eight different clubs for a hearing into alleged age or identity cheating, with president Samuel Eto'o keen to eradicate the problem in the central African country.

But Eto'o has been dealt another setback in his bid to thwart their age fraud crisis after the majority of players selected for this year's UNIFACC tournament - contested by the Under-17 sides of Central African Football Federations' Union countries - were disqualified after failing MRI tests.

The tests are used to determine a player's age by scanning their wrists and measuring bone growth.

A Cameroon statement read: 'The Cameroonian Football Federation informs public opinion that as part of the preparations for the UNIFFAC Limbe 2023 tournament, qualifying for the next African U17 Nations Championship, 21 players out of the 30 currently on training have failed at the outcome of the MRI tests.

'This action is the result of strict instructions given by the President of FECAFOOT acting under the mandate of the COMEX, in order to put an end to the tampering with civil status records which have, in the past, tarnished the image of the apex body of the Cameroon football. FECAFOOT urges all actors, in particular educators, to ensure that the ages by category are respected.'

Cameroon have recently come under criticism for withholding the list of selected players for both their Under-20 and Under-17 teams.

There are also said to be concerns regarding their squad for this year's African Nations Championships, with an official list of players still not made public ahead of their opening game on January 16.

Age fraud has been a long-running concern for African football, with many of their international successes at junior level clouded by allegations of over-age players.

Accusations have regularly been made but there has seemingly been little attempt to investigate it from the authorities.

One of the better-known cases involved former Cameroon international Tobie Mimboe, who was found to have been providing birth certificates that suggested he got younger over time.

In 2019, Guinea were disqualified from the Under-17 World Cup after two of their players were found guilty of age-cheating.

Back in 1989, FIFA banned Nigeria from their age-group tournaments after finding that the birth dates of three of their players in the 1988 Olympics were different from ones used by the same players in previous tournaments.

After becoming the Cameroon federation's president in December 2021, Eto'o promised reform of the game in the country and stepping up his efforts for exactly that.