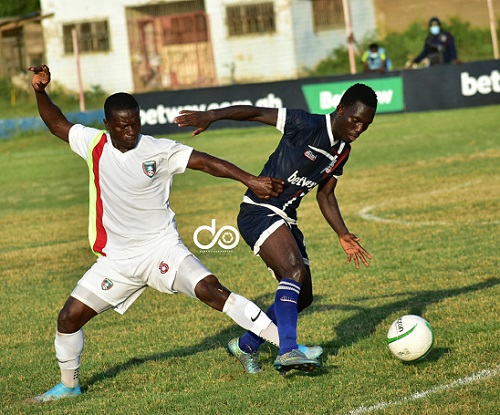 The Ghana Premier League matchday 3 clashes came off over the weekend across the various match centres.

Asante Kotoko and AshantiGold were not in action on Match Day Three due to their involvement in the 2020/21 CAF inter Club competitions.

From the matches played over the weekend so far no club was able to stun a home team.

The likes of Hearts of Oak, Dreams FC succumb to defeats while Medeama, Bechem United, Elmina Sharks, Eleven Wonders only managed to secure a point on their travels.

The home teams over the weekend joyed a good run.

Asamoah Gyan played his first game in the domestic top-flight for the first time in 17 years for Legon Cities against Medeama in matchday three of the 2020/21 Ghana Premier League.

The goal poacher who signed for the Royals during the last transfer window climbed off the bench in the second half but his enough wasn't enough to aid his side to secure a win.

The last time Gyan played in the league was in 2003 with Liberty Professionals.

The Aiyinase based club jumped to the summit of the league following their victory over Dreams FC. Karela came from a goal down to beat Dreams FC 2-1 at the Crosby Awuah Memorial Park on Sunday.

The win ensured they now lie top with 7 points from three games.

Cape Coast Mysterious Ebusua Dwarfs on Sunday, recorded their first win of the season after a slim win against Berekum Chelsea at Cape Coast Stadium.

Dwarfs captain Dennis Korsah scored the only goal of the game in the first to hand his side a hard-earned win.

Dwarfs will next travel to Accra to face Great Olympics with Berekum Chelsea hosting Liberty Professionals at the Golden City Park.

Accra Hearts of Oak search for their first win of the season continues as they succumb to a 1-0 defeat to Inter Allies.

A belter from Richmond Lamptey Goals in 61st minute was all the Capelli Boys needed to seal the points against the Phobians.

The defeat means Hearts of Oak are yet to record a win this season. The Phobians only have a point from their opening two games and have a game in hand against Aduana Stars.