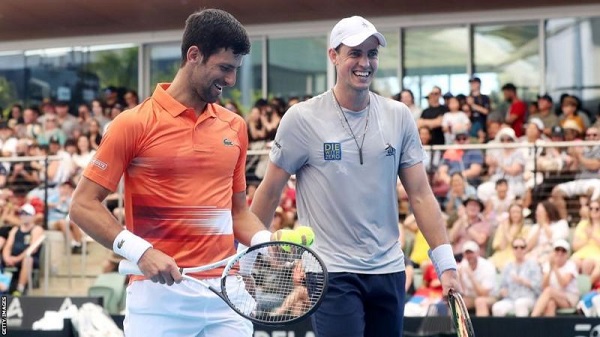 Novak Djokovic received a positive welcome back to Australia as he made a rare doubles appearances at the Adelaide International.

The Serb was deported prior to the 2022 Australian Open because of his Covid-19 vaccination status.

Djokovic's three-year visa ban was overturned in November, allowing him to enter the country.

He and Canada's Vasek Pospisil were beaten 4-6 6-3 10-5 by Tomislav Brkic and Gonzalo Escobar on his return.

The 21-time Grand Slam champion enjoyed overwhelming support from the crowd throughout the match, greeted by cheers and chants of "Novak, Novak" as he made his way on to court.

The 35-year-old, currently ranked world number five, stayed behind after the defeat to sign autographs and take photographs with fans.

He is top seed in the singles in Adelaide and will face Frenchman Constant Lestienne in the first round on Tuesday as he continues his build-up to the Australian Open, the first major of the season, which starts on 16 January.

Djokovic is a nine-time champion in Melbourne and is just one Grand Slam title shy of Rafael Nadal's men's record of 22.

What happened 12 months ago?
Last January, when Djokovic arrived in Australia for the 2022 tournament, Covid-19 cases were rising fast and government rules required anyone entering the country to be vaccinated - unless they had a valid medication exemption.

Djokovic, who was detained by the Australian Border Force on entering the country and forced to stay at an immigration hotel, claimed he had obtained a medical exemption to defend his title without being vaccinated because he had recently recovered from Covid.

However, after 10 days of legal argument, the government ruled he did not meet the requirements for entry, so his visa was cancelled and he was automatically banned from entering Australia until 2025.

Djokovic's detention dominated the headlines in the build-up to the tournament, with crowds gathering outside his hotel campaigning for and against his eventual deportation.

Immigration Minister Andrew Giles - whose government came to power in May - overturned the visa ban in November and Djokovic said he was "very happy" on hearing the news.