AFCON 2019: Only teamwork can make you win the trophy - Akufo-Addo advises Black Stars 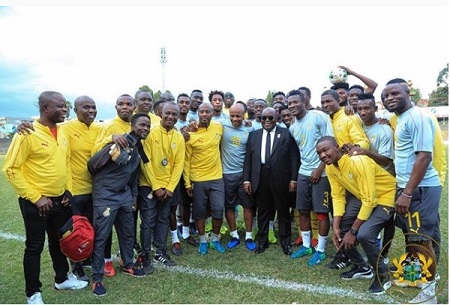 President Akufo-Addo has advised the Black Stars that only team work will get them the Africa Cup of Nations (AFCON) title.

Ahead of the Black Stars departure to Dubai for pre-AFCON 2019 camping, President Akufo-Addo challenged the team to end the country's long wait for an African title, he met the team in farewell solidarity get together on Thursday 30th May at Jubilee House, Accra.

"Teamwork is at the heart of success in football as it is in every enterprise. Without it, you can't succeed, even a president needs it"

"Teamwork is absolutely critical in achieving your goal, it means you have to be each other keeper"

He further cautioned them to put all differences aside be it ethnic, religious and other divisions as it does not help teamwork.

The Black Stars will depart Accra, on Saturday, June 1, for pre-tournament preparations in Dubai, ahead of Africa's flagship competition, AFCON 2019 in Egypt.

The team will play two high profile preparatory matches against Namibia and South Africa where coach Kwesi Appiah will have the opportunity to access his 29 players and later trim it to the final 23 to represent Ghana at in this summer's tournament.