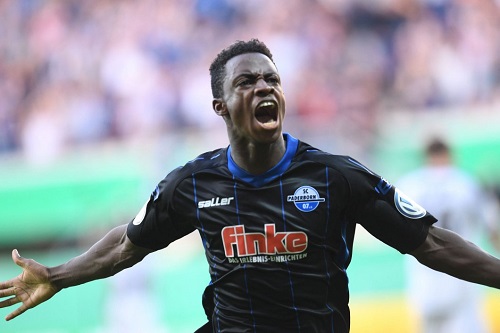 Christopher Antwi-Adjei has joined Black Stars teammates in camp which is a morale booster to coach Kwesi Appiah in the wake of recent injuries suffered by his call-ups.

The Paderborn's attacker was among the 7 players handed a debut call-up by Kwesi Appiah for Ghana's doubleheader for the AFCON 2021 qualifiers against South Africa and Sao Tome and Principe.

However, due to documentation issues, his arrival to Black Stars camp delayed and the Ghana Football Association has revealed that the German-based Wideman is in town but will not be included in today's clash against Bafana Bafana at the Cape Coast Stadium.

"SC Paderborn's Christopher Antwi-Adjei has arrived in the country and he's on his way to the Black Stars camp in Cape Coast from Accra. He will, however, not be part of the match-day squad against South Africa this evening due to his late arriva,'' GFA statement read.

The GFA further announced that Ghana has suffered another blow in the lead up to today's clash as Lumor Agbenyenu torn his muscle while training.

The defender has been ruled out of both South Africa and Sao Tome game and he is on his way to his club Real Mallorca for treatment.

Meanwhile, defender Joseph Attamah Larweh has received a late call-up to the squad to replace him. He took part in the team's final training on Wednesday.

"Defender Lumor Agbenyenu has been ruled out of this evening's match after a scan in Accra confirmed he has torn his muscle. He has been released to return to his club, Real Mallorca for further assessment and treatment," GFA statement read.

Ghana will lock horns with South Africa today at the Cape Coast and kick-off at 7:00 pm. The team will next play Sao Tome and Principe on November 18.