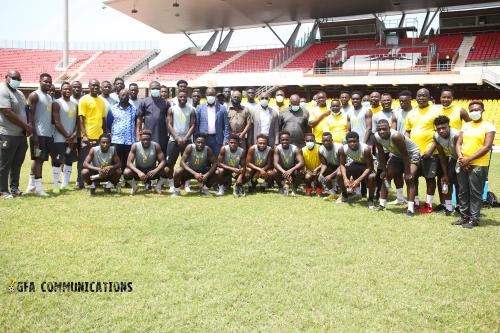 The President of the Ghana Football Association (GFA), Kurt Okraku has charged the Black Stars to record a win against the Bafana Bafana of South Africa later this week to secure qualification to next yearâ€™s AFCON in Cameroon.

The Black Stars who left the shore of Ghana on Tuesday after holding their final training at the Accra Sports Stadium will play theÂ Bafana Bafana in the penultimate game of the AFCON qualifiers in Group C.

With both sides on 9 points, a win for either will provide a better chance of finishing the group stage as winners to earn the ticket to the 2021 AFCON.

Speaking to Black Stars players after training on Tuesday, GFA boss Kurt Okraku has stressed the importance of the upcoming match.

â€œWe have two more games in front of us and from these two games, we have to be part of the best assembly on the African continent when we speak about football. What that means is that from the two games we have to qualify. But the qualification starts from the very first game in South Africa for which reason in the last four weeks we have been preparing for these all-important two assignments. When we March out of the tunnel to face the Bafana Bafana letâ€™s have one thing in mind, qualification,â€ the GFA capo told players.

The Black Stars have been urged to ensure they put in the needed effort to go on to win the match against the Bafana Bafana.