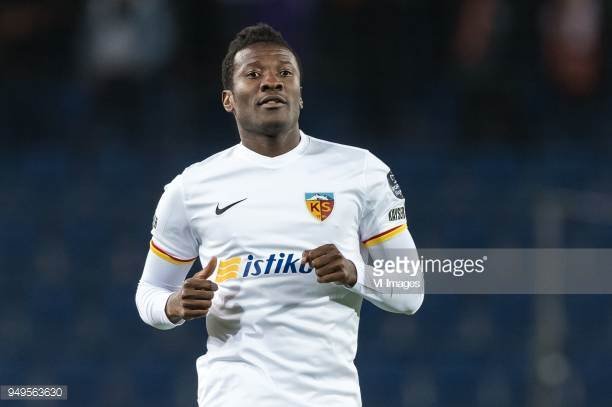 Former Al Ain striker Asamoah Gyan says the money on offer when he moved to the UAE was simply too good to turn down, confirming his time in the Emirates changed his life financially “forever”.

The Ghana international, currently plying his trade in Turkey with Kayserispor, spent four years in the Garden City following an initial loan move from Sunderland eight years ago

Eventually making the deal permanent after an impressive first season, Gyan went on to become one of UAE football’s most successful imports. By the time he left in 2015, he had scored 128 goals in 123 matches for Al Ain.

“Look, I’m going, to be honest here, it was the money,” Gyan told this month’s FourFourTwo magazine. “It was too good to turn down. But a hidden detail is that Sunderland accepted a £7 million [Dh33.7m] loan offer for me from Al Ain before even informing me.

“Then they decided to convince me that the money was very good for a short loan and that the club needed the money. I was enjoying my football but Al Ain offered me wages that instantly made me the best-paid footballer in Africa. I couldn’t resist.

“Pray you never be put in such a situation. It changed everything and I just had to take it and leave it. I don’t regret it though because it made me who I am now.

“I enjoyed playing at Al Ain, I stayed for four seasons, and it changed my life financially forever.”

During his time in the UAE, Gyan helped fire Al Ain to three league titles and one President’s Cup crown, scoring the winner in the 2014 final. The striker won the UAE top flight’s Golden Boot three times and was the top scorer in the 2014 Asian Champions League, notching 12 times as Al Ain made it to the semi-finals.

Ghana's all-time leading marksman, Gyan transferred from Al Ain to China’s Shanghai SIPG for a reported €20m (Dh82.3m), although the actual figure is thought to have been considerably lower.

After scoring seven times in 20 appearances, the forward made a surprise return to the UAE the following year, joining Al Ain rivals Al Ahli on a year-long loan. Injuries blighted his time in Dubai, though, with Gyan scoring 11 times in 25 matches. He moved to Kayserispor in July 2017.

Now 33, he is attempting to regain full fitness to make next month's Africa Cup of Nations.