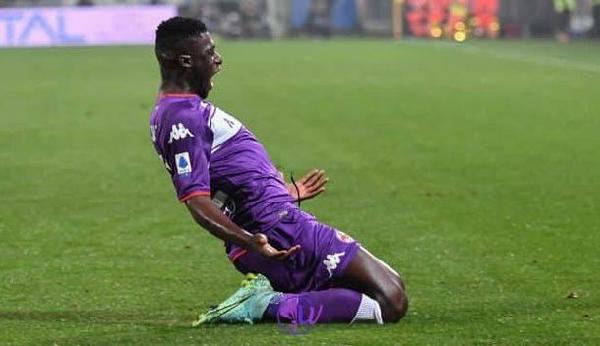 Alfred Duncan was on target for Fiorentina as they defeated Juventus 2-0 to secure a spot in next season's Europa Conference League.

It will be the first time in five years that La Viola will be playing in any European Cup competition.

Alfred Duncan's finish on the stroke of half-time and Nicolas Gonzalez's late penalty gave Vincenzo Italiano's side the win they needed to guarantee continental competition.

Fiorentina ensured seventh spot in Italy's top flight, three points ahead of Atalanta who lost 1-0 at home to Empoli and miss out on Europe for the first time since Gian Piero Gasperini took over as coach in 2016.

Giorgio Chiellini made his final appearance in a Juve shirt in a typically feisty match between big rivals and he left the field with a bleeding head after a clash with Fiorentina forward Krzysztof Piatek in build up to Duncan's goal.

The 37-year-old didn't come back out for the second half and ended his Juve career unable to help his team salvage something from the match.

It is Duncan's fourth goal this season and he also has four assists all from central midfield.