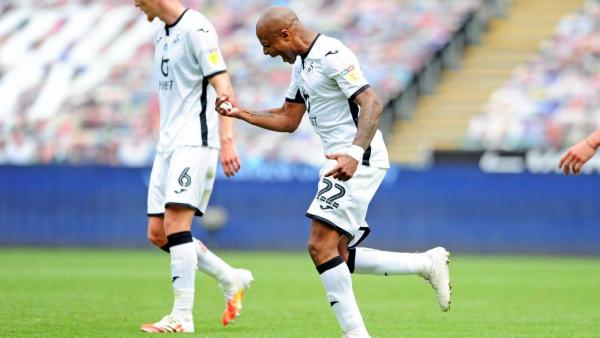 Swansea City forward Andre Ayew has been named in the Championship Team of the Week, following his sparkling performance against Sheffield Wednesday over the weekend.

Andre Ayew was on target as Swansea City recorded victory over Sheffield Wednesday at the Liberty Stadium in the Championship.

The attacker who has been in fine form this season scored a second-half penalty to help his side beat the visitors 2-1 on Sunday.

The goal was his 16th for Swansea City in the current campaign.

Our @SkyBetChamp team of the month for June -- @BrentfordFC won all 3⃣ games last month and have 3⃣ players in this XI pic.twitter.com/4TjoavNsUV

Sheffield Wednesday enjoyed the better of the opening period, but Steve Cooper’s side responded as Rhian Brewster fired home his seventh goal of the season seven minutes into the second period.

And Andre Ayew sealed the win from the penalty spot, converting his 16th goal of the campaign after Connor Roberts had been brought down in the box, with Atdhe Nuhiu’s late header not enough for the visitors.

The result means Swansea are four points off the top six with five games remaining in the season, and Cooper will have been pleased with how his side hit their stride after the break.

Swansea City will be hosted by Birmingham City in teh English Championship on Wednesday.