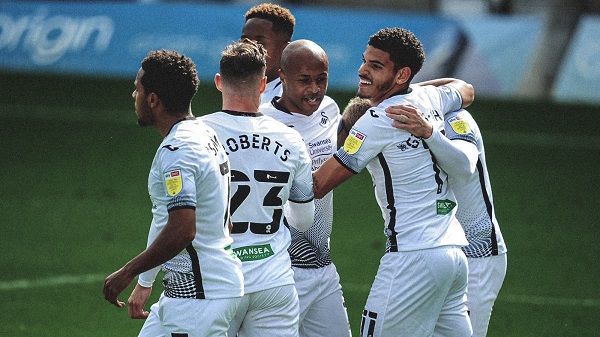 Andre Ayew's first goal of the campaign along with summer signing Jamal Lowe's maiden strike for Swansea gave Steve Cooper's men a comfortable lead at the break following what was a commanding first half display from the visitors.

Victory ensured Swansea now have seven points from a possible nine so far this term, the third season in a row in which they've achieved that feat.

Swansea started the match of the two sides and their pressure paid off, as Ayew was on hand to poke home Bidwell's inch-perfect cross to register his first goal of the campaign and give the visitors a deserved lead in Buckinghamshire.

The Ghana international very nearly doubled his side's lead a minute later, although he was well denied by Allsop from inside the box as Swansea oozed confidence.

The away side looked a cut above, and they should have had a second when Bidwell crossed towards Ayew and Gibbs-White at the back post, although the latter's header was easily saved.

But Cooper's troops did get their second of the afternoon midway through what was an impressive opening half as Ayew's drilled cross was turned home by Lowe.