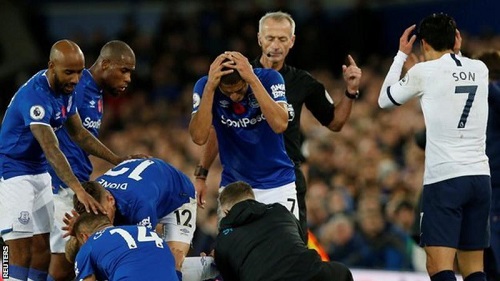 Everton midfielder Andre Gomes is "expected to make a full recovery" after he had surgery to repair a fracture dislocation to his right ankle, his club have said.

The 26-year-old Portugal international suffered the injury during Sunday's 1-1 draw with Tottenham.

Gomes will recover in hospital before starting his rehabilitation under the guidance of Everton's medical staff.

Everton's statement added: "On behalf of Andre, the club would like to thank all Everton supporters and members of the wider football family for the overwhelming messages of support we have received since yesterday's match."

'I wish we'd lost 0-5 and this didn't happen'
Cenk Tosun, who scored Everton's 97th-minute equaliser, said his team's players "nearly cried" in the dressing room after the game.

"You win, you draw, you lose but all that doesn't matter when something like this happens," Tosun wrote on Instagram.

"I wish I didn't score; I wish we lost 0-5 and this didn't happen. I know you will come back stronger bro and we will be there for you."

There was a six-minute stoppage as medics attended to Gomes.

The incident, which involved Tottenham forward Son Heung-min, initially looked innocuous, but the mood immediately changed among the players and crowd as the full extent of the injury became apparent.

Son was sent off by referee Martin Atkinson as Gomes, who was eventually taken off on a stretcher, received extensive treatment.

'More than a football game'

"This is a bad moment for us and our team - this was more than a football game," he said. "We will give all support to Andre and his family. As a group, we have to stay together and show the spirit we showed following the incident.

"Our players now, they are sad - a tough moment for us in our dressing room and for Andre, but the spirit we showed after that moment on the pitch I think is a good answer for you.

"He is seriously injured but I am 100% sure Andre will become stronger as a football player and as a man, because he is a fantastic lad, a fantastic professional."

Everton midfielder Fabian Delph appeared to still be affected in a post-match TV interview when asked about his team-mate.

"He's one of our brothers, someone we care about deeply," said the former Manchester City player. "It's hard to put into words. The sooner we can get in touch, the better. That was difficult to see."