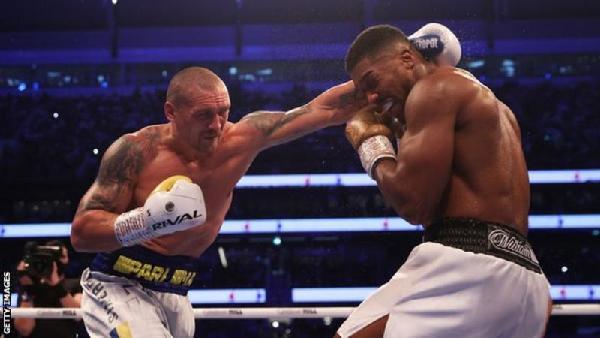 Anthony Joshua's rematch with Oleksandr Usyk has been confirmed as taking place in Saudi Arabia on August 20.

Joshua, 31, is a two-time world champion and will look to avenge the second defeat of his career.

Usyk was in Ukraine helping the war effort against Russia and earlier in the summer it appeared the rematch would have to be postponed.

But the Ukrainian was given permission to leave the country in March to train for his second fight with Joshua.

The 'Rage on the Red Sea' will take place in Jeddah on Saudi Arabia's west coast.

"I have a goal, with the help of the Lord I will complete my mission," said Usyk.

Joshua called the fight "my date with history" as he has the chance to become a three-time unified heavyweight world champion, adding: "A happy fighter is a dangerous fighter and I am the happiest and most motivated I have been."

The Londoner also gave a "special shout out to the Ukrainian fans who have been through a really tough time".

Usyk is unbeaten in 19 professional fights, but has fought the majority of his career at cruiserweight, where he was undisputed champion.

Joshua previously lost to Andy Ruiz in 2019 and then avenged the defeat six months later.

Why is Joshua fighting in the Middle East?

Joshua has fought once before in Saudi Arabia, against Ruiz. The decision to fight there was a controversial one, because of the country's human rights record.

A 2021 report by human rights organisation Grant Liberty said Saudi Arabia had spent upwards of $1.5bn to bring international sport to the country in a bid to improve its image, also known as 'sportswashing'.

Boxing is not the only sport to be criticised for staging events in Saudi Arabia.

Formula 1, tennis and golf have all held events in the country in recent years, while the Saudi-funded LIV Golf tournament took place on the outskirts of London last week with players accepting huge appearance fees to take part.

Promoter Eddie Hearn and Joshua have opted to host another fight in a country that has been accused of human rights abuses and criticised for a military campaign in neighbouring Yemen that has caused a humanitarian catastrophe.

Saudi Arabia's international standing was severely damaged by the 2018 killing of Jamal Khashoggi, a US-based Saudi journalist who was a prominent critic of the government.

It is among the countries that carries out the most executions, women's rights activists have been jailed and it is a nation where political parties, trade unions and independent human rights groups are banned.

Joshua and Usyk's first fight was at Tottenham Hotspur Stadium and the rematch could have been staged there, or at Wembley Stadium in London or Cardiff's Principality Stadium.

Hearn has repeatedly said Saudi Arabia offers the biggest financial package. In 2019, the Matchroom promoter dismissed concerns about sportwashing and the damage it could do to his, Joshua's and the sport's reputation.

"The sportswashing thing is something over my head," Hearn said.

"Our job is to provide opportunities to the fighters. If I put a proposal in front of Joshua and he said to me he was going to Saudi Arabia, and I advised him against, he would say 'see ya'."