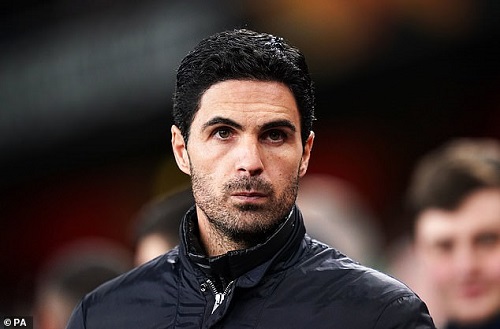 ArsenalÂ manager Mikel Arteta has spoken for the first time about hisÂ coronavirusÂ ordeal after revealing he has made a swift recovery from the illness.

Arteta became the first high-profile figure in English football to be struck down by the virus, which prompted theÂ Premier LeagueÂ to suspend fixtures.Â

Since then, several more players, includingÂ Chelsea's Callum Hudson-Odoi, have tested positive, resulting in the season being suspended indefinitely.Â

Arteta has now detailed the story behind is diagnosis and recovery from coronavirus and says he's back to his normal self.Â Â

'It took me three or four days to start feeling much better and with more energy, to leave the symptoms behind and now, the truth is that I feel very well.'

The Spaniard became aware of symptoms shortly after the Gunners' Europa League clash against Olympiakos before a rapid sequence of events unfolded.

'Everything happened very fast,' he added. 'On Tuesday afternoon I was feeling so-so and I went to see the doctor but he wasn't there.

'I got a call from the board of directors after training while I was in my car and they told me that the president of Olympiakos had tested positive and everyone that had been in contact was at risk.

'I went on to tell them that I wasn't feeling well and that we had a situation because we had lots of players that had been in contact with them [Olympiakos].

'We had a game against Manchester City the next day and obviously we couldn't put lots of people at risk without saying anything.

'I had the test done last Wednesday and I was diagnosed on Friday, when we had to communicate it to the Premier League that I had tested positive.

'Obviously all those that had been in contact with me had to go into quarantine, and consequently, games had to be suspended.'

Mikel Arteta's wife Lorena had intially given fans an update on his situation, a couple of days after he tested positive forÂ coronavirus.

In an Instagram video, she said he is 'feeling fine' and Lorena also noted that the symptoms would not usually have stopped him going to work.Â

Lorena said at the time:Â 'Under the circumstances that we are right now, I felt the responsibility of sharing our situation.

'I want to say thank you to everyone who sent good vibes, texts, emails and calls, really it's been overwhelming.Â

'I understand as well that you want to know what's going on.

'My husband is feeling fine, he is well. It's true that he had symptoms of the virus but the symptoms would have never stopped him from going to work in a normal situation.'

'The symptoms of COVID-19 are similar to that of the flu. People with symptoms such as a fever, sneezing, or coughing are being advised to self-isolate at home.Â Â Â

'He would have just taken an ibuprofen or paracetamol and he would have gone to work so really, it's nothing major.

'Some temperatures, some headaches but that's it. That's his experience. My kids and I are perfectly well.

'Apparently the virus is not lethal. It could be for a certain amount of people but the majority are going to go through it with mild symptoms.

'Maybe some people have more symptoms than others but it won't be anything really bad.'