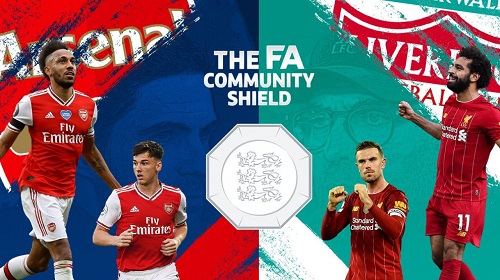 Premier League winners Liverpool face FA Cup holders Arsenal in the curtain-raiser at Wembley on Saturday afternoon, with both sides looking to continue their build-up for the new domestic season.

Most supporters may not count the Community Shield as an official trophy, but it can often offer an insight into how a team may perform for the rest of the campaign.

Arsenal vs Liverpool is scheduled for a 3:30 pm and the match will be played behind closed doors at Wembley with no fans due to the present government guidelines regarding coronavirus.

Liverpool are appearing in this annual fixture for the second successive year following a 2019 penalty shootout defeat by Manchester City, but this time as Premier League champions having finally ended their 30-year wait for the title.

Jurgen Klopp's side have warmed up for the contest with a pre-season training camp in Austria that included friendlies against Stuttgart and RB Salzburg.

Like Liverpool, Arsenal are 15-time winners of the Community Shield set to appear in the Wembley showcase for the 24th time.

Mikel Arteta's side finished an eventful campaign on a high note by coming from behind to defeat Chelsea 2-1 and secure a 14th FA Cup triumph thanks to a brace from captain Pierre-Emerick Aubameyang.

Arsenal put League One opponents MK Dons to the sword in anticipation for this match in midweek.

What the Managers said

Jürgen Klopp: “We prepare for a whole season, one of the most intense we’ll ever experience in our lives because of the amount of games, the time we have for that and all these kinds of things. It’s not perfect but it’s as perfect as it can be. We will try everything to win the game, that’s how it is. Arsenal will probably do the same..”

Mikel Arteta: “[on beating Liverpool in July] I think it gave us a big platform of confidence and belief that we could challenge and play against the top teams at that level as well and beat them.”