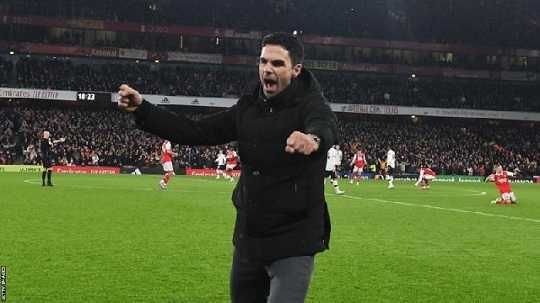 Arsenal's hunger and fire as they pursue a first Premier League title in almost two decades burns so brightly that Pep Guardiola was moved to hold it up as an example to his all-conquering Manchester City.

When Guardiola launched an angry broadside in all directions to provoke improvement from the reigning champions after City's 4-2 win over Tottenham, Arsenal was the name that played across his lips with regularity.

It was the most significant indicator of Arsenal's progress and growing maturity under his former right-hand man Mikel Arteta that Guardiola made it clear who he regards as their serious title rivals - even warning they would "destroy" City unless they improved.

And if anyone was in any doubt exactly why Guardiola was delivering his warning, they need only look at the manner of Arsenal's magnificent victory over improving Manchester United in a thriller at Emirates Stadium.

The bare statistics state that Arsenal's 3-2 win, secured by Eddie Nketiah's 90th-minute strike, puts them five points clear of City with a game in hand.

Dig deeper, however, and the wider significance of Arsenal overcoming a United side heading firmly in the right direction under manager Erik ten Hag becomes clear.

Arsenal, in the eyes of those who have seen them wilt under pressure in recent years, are having to prove themselves on a weekly basis. The good news for the increasingly optimistic Gunners fans who dream of a first title since 'The Invincibles' of 2003-04 is that Arteta and his players are doing it.

Why should there be lingering doubts about the pedigree of a team that have won 16 and only lost one of their first 19 league games, with Sunday's win setting the record straight against the only team to beat them in the top-flight this season?

And there were other factors at work that made this Arsenal's biggest test this season and, arguably, their biggest win.

Manchester City's response to Guardiola's demands, a comfortable 3-0 win against Wolverhampton Wanderers, meant that Arsenal could feel the the champions on their shoulders with all the pressure that brings.

And when Marcus Rashford fired Manchester United in front with a stunning low strike after only 17 minutes, it punctured the mood around Emirates Stadium, although Arsenal's fans instantly turned up the volume to inspire a comeback.

Their call was answered by Nketiah's equaliser and even when Lisandro Martinez levelled Bukayo Saka's goal, Arsenal demonstrated another side to their character that answered questions raised in recent weeks.

Arsenal, and manager Arteta, allowed themselves to be sucked into an attritional goalless draw at home to Newcastle United in early January, with tempers fraying and discipline lost.

Arteta received a yellow card for a first-half outburst here but when the acid test came, Arsenal's players kept emotions in check and showed no signs of the title pressure as they remained composed, creating chances until the poacher Nketiah turned up in the six-yard box to send Emirates Stadium wild.

It was fitting with the drama of the day that Arsenal's goal celebrations were put through the torture of a VAR check for offside before the full release of thunderous sound.

There was an added edge to Arsenal's joy because these three points were earned, deservedly, against an improving Manchester United. A draw would have been disappointing but not devastating, such was the task in front of Arsenal.

The strength of Manchester City's squad may yet have a decisive impact on this title race but Arsenal's Nketiah has emerged from the shadows to play a vital role in the absence of injured Gabriel Jesus, who was so pivotal to Arsenal's style in the months before the World Cup.

Nketiah has taken his chance and then some, his two goals here making it 13 goals in his last 13 home starts.

And while Jesus may be sidelined for some time yet, Arsenal have another crucial element of title-winning know-how imported from Manchester City in Oleksandr Zinchenko, whose ability to link defence, midfield and attack in his playing package makes him invaluable to Arteta.

There are also reinforcements for Arsenal's title challenge.

Arteta introduced Leandro Trossard, the new £21m signing from Brighton, late on while Poland defender Jakob Kiwior was watching from the stands before the formalities of his £21m move from Serie A club Spezia.

Arsenal were under similar intense scrutiny when they travelled to Tottenham for the north London derby seven days previously and produced equally compelling evidence that Manchester City may only get two chances to knock the Gunners' title show off track when they play in London on 15 February then in Manchester on 26 April.

The dates both feel like they should be circled in red on the calendar because Guardiola will feel increasingly that they cannot look to others for assistance given Arsenal's irresistible form.